Earlier this month, I was pleasantly surprised to discover that Cowboy Rodeo, who lovingly ported the classic Amiga titles Pinball Dreams [$4.99/Lite] and Pinball Fantasies [$5.99] to iOS, were getting set to release a brand new version of Pinball Dreams that was fully remade with 3D graphics. Just a few days ago that game, known as Pinball Dreams HD [$4.99], arrived in the App Store.

I was sort of confused as to why they would decide to remake the game seemingly out of the blue, but according to the developer they had been getting requests for iPad versions of their games ever since the iPad’s release last year. But redrawing the old graphics to suit the new screen size and resolution would have been too large of an undertaking, so they started toying around with the idea of building the tables in 3D to solve those problems. After being happy with the results, they took the project full steam ahead.

Now, two and a half years after the first iOS release and nearly twenty years after the original Amiga release, Pinball Dreams HD breathes modern life into a retro classic. Purists tend to get up in arms when people go fiddling around with their classic games, but before you go blasting hatred over your IRC channel or start calling for Cowboy Rodeo’s head over the Usenet boards, you should know that Pinball Dreams HD uses the exact same gameplay code as the original iOS version. And, in practice, it plays nearly identical to how you remember it. It also features all the original music and sound effects. 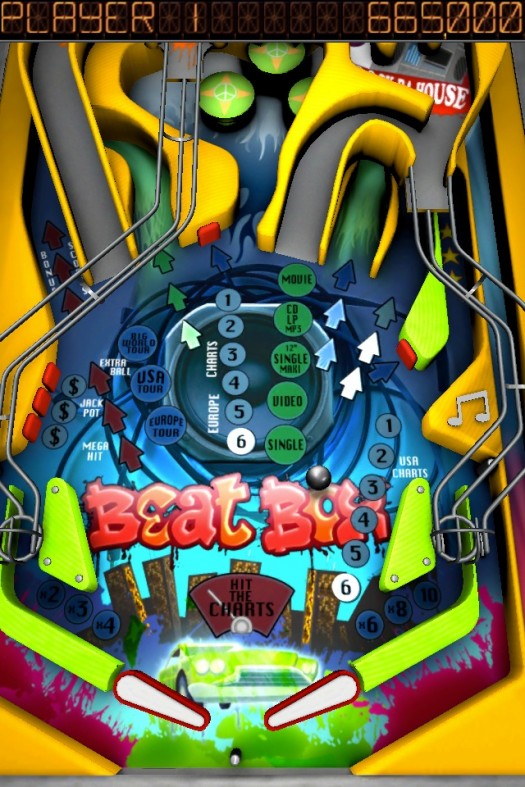 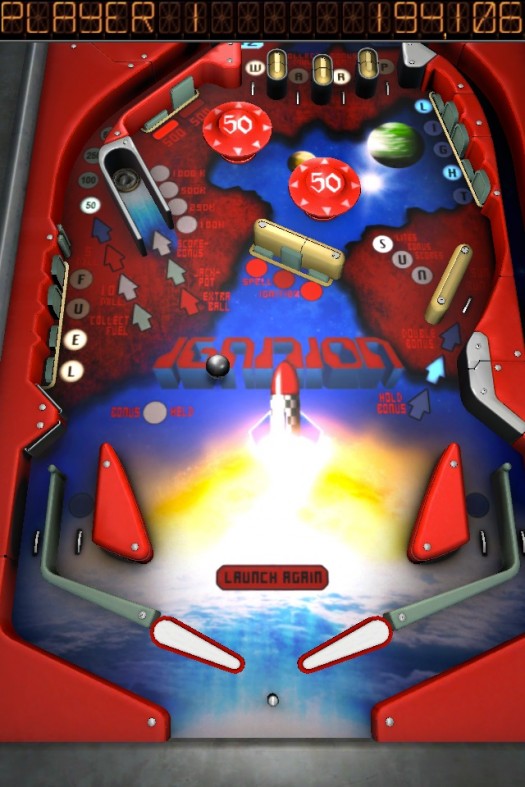 Although I’m not an original fan of the game from back in the Amiga days, I did fall in love with Pinball Dreams back in ’09 on the iPhone, and it pleases me as well to see the game’s integrity retained. It actually feels pretty surreal to be playing Pinball Dreams HD with fancy 3D graphics in your face but sweet retro sounds hitting your ears. It feels like I’ve entered some sort of bizarro time warp, but I’m loving every minute of it.

One thing to note is that because the game is in 3D, there is a dynamic camera that follows the ball around the table. It’s not quite as dramatic as the camera in Gameprom’s pinball games like War Pinball [99¢/HD], so if you’re prone to nausea from those then you’re probably still safe with Pinball Dreams HD. But the lack of any kind of camera options is annoying, especially the absence of a single overhead shot of the table.

Thankfully this should be rectified with the first update to the game which Cowboy Rodeo has said in our forums will include additional camera options as well as a few other minor fixes. They’ve also pretty much confirmed that Pinball Fantasies will be getting this same HD treatment down the line too, and that Pinball Dreams HD will be hitting the Mac App Store soon. I am definitely looking forward to both of those.

One of our forum members has recorded this extremely lengthy video of Pinball Dreams HD so you can see what it’s like in action:

If you’re a fan of the original Pinball Dreams, whether on the Amiga or on iOS, then don’t be scared of checking out Pinball Dreams HD. The game still plays and feels like it always has, but now it looks fantastic in high resolution on the iPad and Retina Display devices. If you’re new to the Pinball Dreams world, then know that you’re getting 4 extremely well designed tables and one of the best digital representations of pinball ever released. It’s not a very realistic pinball simulation, but in 1992 it was the pinnacle of video game pinball and that has held up incredibly well over the years.

Pinball Dreams HD is an excellent example of how to modernize a classic while still remaining true to its roots, and it’s one that pinball fans shouldn’t hesitate to pick up.