Way back in early to mid 2009, we were at the height of top-down dual-stick Geometry Wars-style space shooter releases. It seemed like every week or two there was another new one to check out, and although they each had their own sets of strengths and weaknesses, the vast majority offered up pretty compelling arcade experiences that were perfectly suited to the platform.

Among the many great dual-stick shooters available was Occurro! [Free] from developer Acceleroto. Occurro! was released in July of ’09 and one of the things that set it apart from similar titles that were available at the time was its excellent controls, something that we noted when we reviewed the game.

Then about a year ago, the release of iOS 4 brought a sound problem that affected Occurro! and the developer pulled the game from the App Store with the intention of solving the problem. Well, additional projects and pesky “real life” got in the way and kept pushing the bug fix farther down the original timeline. At long last, the sound engine was reworked and last week Occurro! was officially re-released along with a bunch of other improvements. 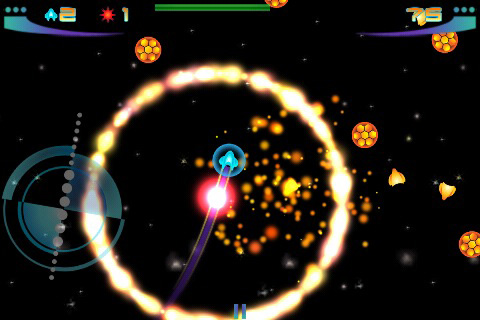 First off, the old leaderboard system was ditched in favor of both OpenFeint and Game Center support for online high score and achievement tracking. The game also now supports multitasking and has received a decent graphical improvement in the explosion and particle effects department. The maximum number of enemies onscreen has also been increased for even more action, and many other minor tweaks and fixes have tightened up the overall experience.

Best of all is that Occurro! is now entirely free to download and play. There are no ads, no in-app purchases, and no plans to increase the price in the future. Acceleroto just wants to put the game out there for people to enjoy and hopefully spread the brand name around for a possible future release. As my mother once taught me, you never look a gift game in the mouth, and for the price of free you should definitely give Occurro! a try if you fancy a solid dual-stick arcade game.