I’ve always thought the early Fallout games would work great on the iPad, (and to some extent they do, if you were able to download iDOS before it got pulled) but like many ancient PC games, the Fallout IP is securely locked up in a twisted web of developers and publishers that have been bought and sold over the years. In the case of Fallout it was originally an Interplay project, which got rolled into Bethesda, which now is part of ZeniMax. There’s even been some brutal legal drama as who owns the rights to a Fallout MMO has been duked out in courts. What I’m getting at, is I’m not holding my breath for an iOS Fallout anytime soon.

So, having totally written that off long ago, imagine my surprise when I stumbled across PipClock [99¢ / Lite] randomly browsing the App Store today. In a nutshell, it takes the “dashboard" style clock and weather apps, but applies a glorious level of Fallout-esque style to it. Seriously, just check out the screenshots: 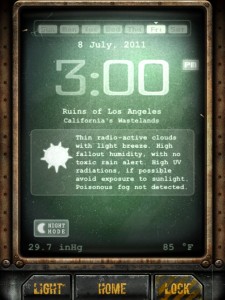 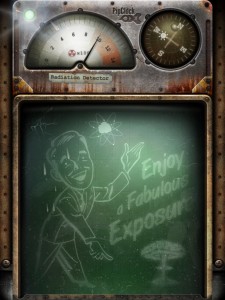 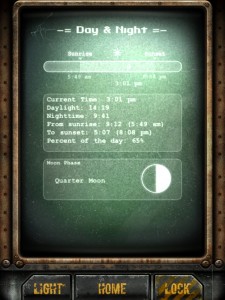 The functionality is basically what you’d expect out of one of these sorts of clock and weather apps, although everything has a wonderful Fallout spin. For instance, here in the “Ruins of Los Angeles" in “California’s Wastelands" it’s 85 degrees out with “poisonous fog not detected". Oh, there’s a faux geiger counter built in too. Each element also has subtle animations, with static, scan lines, and even sparks.

Since upgrading to an iPad 2, I’ve been looking for a good use for my original iPad outside of checking to make sure games we’re reviewing still run on it. With PipClock, I’m thinking I might have to relegate it to night stand duty as PipClock just looks too awesome to not be running all the time. It’s universal too, so you could do the same with an old iPod touch if you’ve got one laying around.