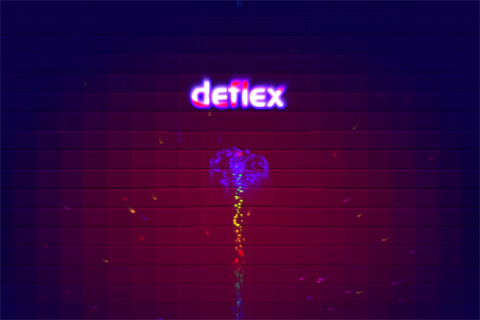 Long-time hirsute, psychedelic game writer Jeff Minter of Llamasoft has released two iOS games, and they’re two of the best games in the App Store: Minotron: 2112 [link] and Minotaur Rescue [link]. His third iOS game, a Universal (iPhone and iPad) release called Deflex, is on the way, and I’ve been having fun with a pre-release he recently sent over, for the past couple of days.

Deflex is a dexterity puzzle game, of sorts. It is an iOS adaptation of a 1982 Llamasoft release for the Sinclair machines, VIC-20, and Atari 8-bits, itself inspired by an earlier, simpler Commodore PET title. Gameplay is tricky to describe, and trickier to master. Or so it seems — I’m rather a ways from mastering it, myself. 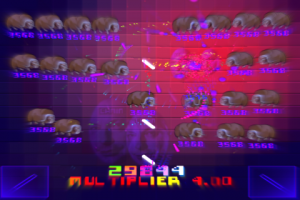 The game takes you through level after level (52 in all) of different characters — oxen, bulls, smileys, telephones — arrayed about various wall configurations. You control a ball that appears at level’s start, bouncing slowly back and forth along a linear path. The object of the game is to absorb the on-screen characters with your ball. It’s the manner in which you get your ball over to all the characters that’s the thing about this game.

At the bottom of the screen sit two buttons, one in each corner. These are your only controls. Each button drops a “bat" onto the screen at the exact position of your ball. These bats are mirrors, deflectors. The left button drops a " / " bat, while the right drops a horizontally opposed " \ " one. You can drop as many bats as you like, but I’d caution towards judicious deployment, and you’ll see why. 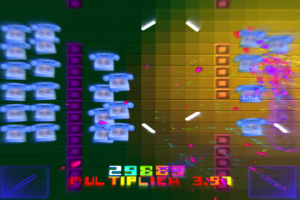 The instant the bat is dropped, two things happen. First, the ball hits it and its course deflects 90-degrees, heading off in a direction dependent upon the direction of its path prior to impact. Second, the bat flips to the opposite type (" / " turns to " \ " and vice versa), adding a sort of mind-bending, deeper complexity to the challenge of strategically clearing the levels. And it’s definitely an exercise in strategy, here — the hurried sort. Because, in order to get the ball to each item on the screen, a clever arrangement of bats must be laid down. Too many bats can lead to chaos, and some levels reward you for lean placement. But you can’t take too long about it, because time spent zipping through empty space is time where your score multiplier is dwindling. If it gets too low…your ball disintegrates.

There is some behavioral variety to the on-screen character objects. Many just sit there. Some move towards you. Some (like jiggly bananas) dart away from you. It’s a bit chaotic. And the elimination of each character triggers the next note in a haunting piano melody. The whole things delivers a tangible, very bizarre game mood. Standard Minter fare, really.

The first few times I played the game I was utterly lost at sea. After a while, I began to understand what was happening. And now, I feel I have some degree of skill at the game, but I’ve got a ways to go before I’m at the top of the leaderboards. Well, there are no leaderboards at the moment, but they’re on the way. OpenFeint and Game Center integration will be worked in before release, and there’ll be 53 score tables in all.

Minter is known for putting out titles that are distinctly “different." (Have a look at Space Giraffe.) Deflex is no exception. The game gets huge points for challenge, uniqueness, and also drippy visual eye-candy. The psychedelia is, as expected, in full effect here.

We’ll let you know when Deflex hits the app store. In the mean time I’ll be honing my skills in an effort to rule the leaderboards. Well, here’s hoping, anyway….