If you watch a lot of the Discovery Channel, you’ve likely caught several episodes of “How It’s Made." If you’re lucky, you might even have seen episodes of apple juice and orange juice. While these might be accurate depictions of how juice is made in the real world, on your iPhone, things are substantially different.

Enter Juice Belts, yet another ultra-casual puzzle game with a three star fruit rating system, physics-based gameplay that centralizes around a drawing mechanic, and tons of gizmos to use to complete your goal. This might sound like a bad thing, but I assure you it’s not. What sets Juice Belts apart is that you’re actually drawing conveyor belts, and through a stupidly simple interface are able to build these oddly elaborate contraptions to transport fruit from its box to the juicer. 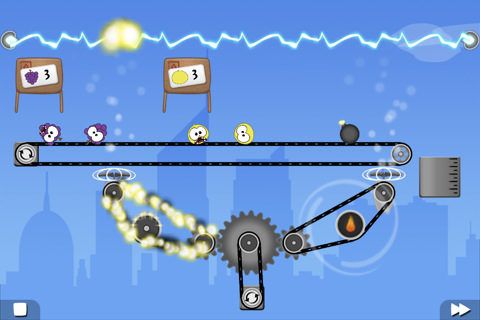 Like all of these types of games, things start out simple to teach players how the mechanics work. At its most basic, you use your finger to draw a conveyor belt to stretch around an engine and a gear. From there, you tap the fruit box to dump the fruit out, and if you did everything right they’ll be transported to the juicer. Of course things don’t stay that easy, and it doesn’t take long before you’re employing fans, elaborate gear setups, motors that can be toggled on and off, electrical fields that vaporize your fruit, and more.

Overall, Juice Belts has a real Incredible Machine [$2.99] vibe to it, but instead of focusing on the placement of tons of different objects, priority shifts to drawing conveyor belts to properly connect existing objects in the game world. You can interact with some objects, but from an interface perspective, everything stays remarkably simple. This allows the player to focus on coming up with intelligent solutions instead of delving through various menus and finding pixel-perfect placement for a number of gizmos.

Games that utilize a drawing mechanic for an input method always seem to work incredibly well on iOS devices, and Juice Belts is no different. 80 surprisingly varied levels are included, as well as Game Center support and a bit of replay value through the golden fruit grading system. I’ve been having a great time with Juice Belts, and I highly recommend giving it a try if you’ve got room on your device for yet another fantastic physics puzzler.