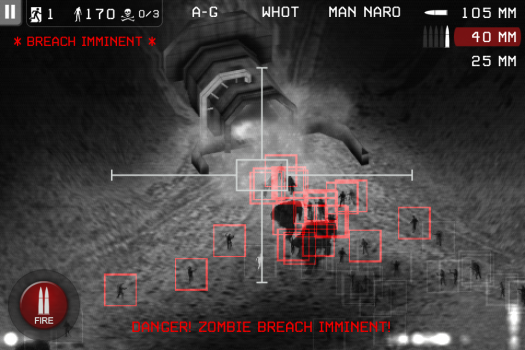 While out at WWDC 2011, I sat down with Limbic Software and Hidden Elephant to have a look at an upcoming game developed in conjunction with Digital Cavemen. Zombie Gunship is, I believe, the most promising title of the aerial zombie shooter genre. Ok, and maybe also the only member of that genre. But, I’m happy it will soon be out there, because sniping zombies from on high is a pretty sweet experience. 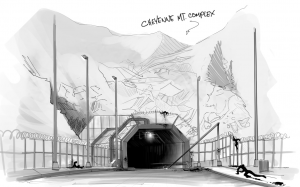 The game puts you in control of the turrets of a Lockheed AC-130 heavily-armored ground attack gunship. But, it’s not merely enemy troops you’re trying to wipe out. It’s zombies. Hordes of zombies. And gigantic, hard-to-kill boss zombies. (It’s grizzly.)

Your mission is to defend an allied army bunker at Cheyenne Mountain from the encroaching armies of the dead while, at the same time, keeping the unholy beasts from ravenously consuming a number of scattered and highly unfortunate ground troops caught outside said bunker — all from the belly of a soaring death machine. You have several types of ordnance with which to rain destruction upon the zombies, and the ability to zoom in for a surgical shot that can save a troop from an in-progress zombie attack.

It’s an endless experience — the zombies just won’t stop. The longer you fend off the horde, the higher your score. But, eventually, a zombie is going to get into the bunker or you’ll inadvertently kill more than two humans with your fire, and that’s when the story ends.

Zombie Gunship features Game Center integration, and an update to come will bring more types of zombies, more weapons, and more locales. Limbic recently partnered with a new art studio and a new sounds team that was responsible for the Gears of War audio effects. Zombie Gunship showcases these new talents nicely. The game should be available for download within the next two weeks. Price has not been announced.

I wanted to share a related anecdote that underscores the value of WWDC to iOS and Mac OS X developers everywhere. On my first night at WWDC Arash Keshmirian, CEO of Limbic, gave me a quick demo of the game, which definitely piqued my interest. Our actual sit-down with the AC-130 crew took place late in the week, on Thursday. Between my first glimpse of the game and our scheduled meeting, the developers were able to implement code optimizations with help from Apple engineers that allowed for three times as many zombies to wander the battlefield as before. And this is just one of many such WWDC success stories I’ve heard from developers we’re close to. A valuable week, indeed. 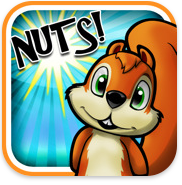 While we were gathered, we also spent some time with Nuts! [App Store], Limbic’s new climb-and-dodge title that launched on May 23rd and jumped high in the paid rankings shortly thereafter. The game challenges you, a squirrel, to make it as high as possible up a frustratingly branchy tree in an effort to gain ranking on the leaderboards. There are several different tree environments or stats (normal, icy, ashy, etc.). It’s a fun little title that kept me well entertained on the late-night flight back home.