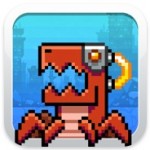 Little known fact about the Araknasaur: its eggs are delicious. And the evil CEO of the Robot Seafood Corporation wants them for breakfast. He wants them so badly, he’s willing to bring the full might of his aquatic robot army to bear against the Araknasaurian hero of Velocispider [$0.99], a Universal retro arcade shooter that’s as ridiculous as it sounds. It’s created by Retro Dreamer, creators of Linkoids [2.99/Lite] and Sneezies. [$0.99/Lite/HD]

Velocispider is a fixed-view shooter with ultra-simple tilt controls. You fire continuously upwards at the Aquabots as they come to kill you and steal your eggs. They start out in Space Invaders-style formations, but switch up often and come at you from all angles. Some randomly drop power-ups that improve your shots, restore a life or give you extra points.  You can charge up a powerful shot by holding down anywhere on the screen. I killed a lot of Aquabots before I learned about the charge shot, but it makes destroying bosses much easier. The tilt movement can be a little touchy and caused me occasional trouble. I wouldn’t say an alternate control method is necessary, but it might be a nice addition for a future update. 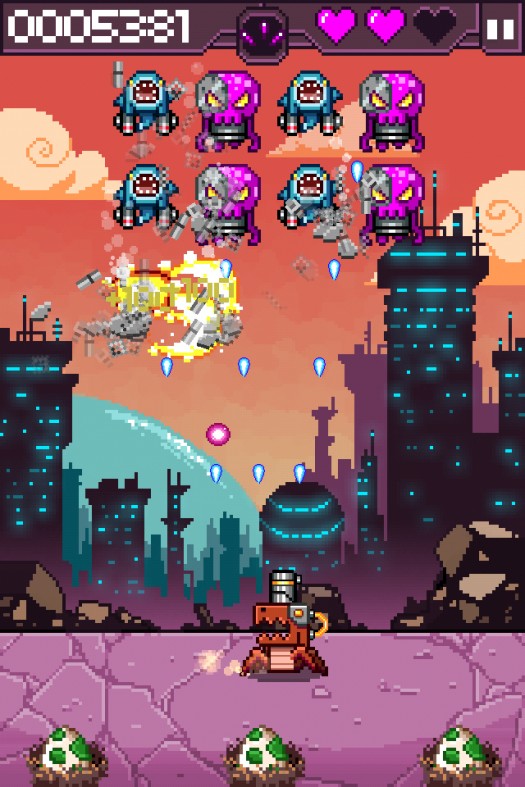 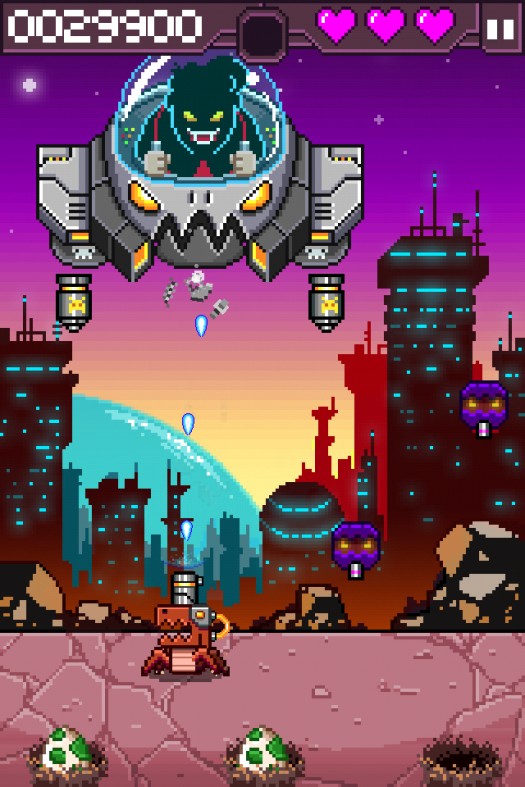 The game is broken up into 20 individual waves. They unlock as you complete them so you can start from your highest completed wave, but that’s just a convenience to help you progress through the game. The real challenge is playing through without dying by losing all three of your lives or all three of your eggs. At its heart, Velocispider is a high score competition, with Game Center leaderboards that will be topped by those who can get through all twenty waves in a single play-through. It’s that challenge that will keep you coming back for another shot long after you’ve seen all that the game has to offer.

But enough about the technical stuff. Velocispider is a ton of fun, but the mechanics aren’t what caught my eye. The game is gorgeous, in a pixel art and chiptune sort of way. The art is full of character, and that character is super ridiculous. I can’t decide if I love the drop sharks (manta rays?) or the bomber whales more. The game also has a great soundtrack, though I wouldn’t mind if a few more tracks were mixed in.

The story is the exact sort of campy over-the-top tale you’d expect from a game like this. There’s not much to it, but I looked forward to the moments between each wave that illustrate the evil CEO’s growing desperation and failing grasp on reality. Sadly, you might miss a few of them if you’re doing well, since they only show up before boss waves or when you start playing.

If you’re anything like me, the thrill of fighting off waves of aquatic-robot monsters with a well armed half-spider, half-velociraptor Araknasaur makes Velocispider an easy buy. Fortunately, it’s also a challenging arcade game that will keep you scrabbling for a high score. Players seem to be enjoying the game in our forums too, so give Velocispider a look and let’s go shoot some squid.