Nitako’s Popstar Physics (Save Toshi 2) [Free] is a puzzle game wrapped in a weird exterior. It’s also a sequel to Save Toshi [Free], a game that got a lot of love for how odd it was, how gaudy it was and ultimately, how fun it was. So Popstar Physics has a lot to live up to both from a technical and a critical standpoint.

Save Toshi was all about saving a pop star who had forgotten how to walk and using physics to transport her to the dance floor. Popstar Physics picks up where the story left off with Toshi once again being kidnapped by demons, but this time they’ve cloned her and turned her into zombies — and no — before your eyes drift away, this isn’t a zombie game, it’s still a 3D physics game — it just happens to have zombies in it. 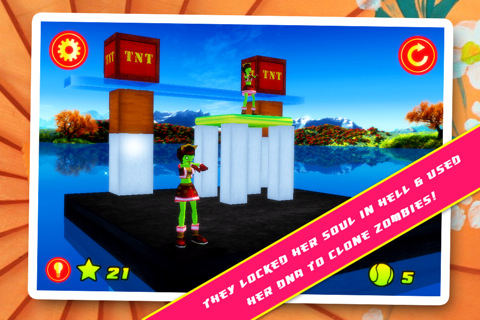 The difference between the two games is that now you’re killing the Toshi-zombies instead of saving Toshi this time. It’s a simple enough change that Nikato can keep the Unity-powered engine and game style, but offer a wholly new experience. On the surface, nothing has changed, you still fire balls with a tap to the screen and you’ll rotate the camera around the self-contained mini-levels with a swipe of the finger. Your goal is to trigger a reaction from the environment by starting with shooting balls at the puzzle pieces and ending with those pieces collapsing onto the zombie-Toshi’s. If it sounds a bit like a 3D version of Angry Birds, you’d be right, but although the premise is similar, they don’t play out the same.

Much like the first game, where Popstar Physics really shines is in its level design. Simple looking puzzles quickly become more complex as you start to dig into them and some of the later levels become improvisational Rube Goldberg devices where you have to toss your balls in a specific sequence while timing your subsequent throws based on the reaction the level gives you. For the star-obsessed, there’s replayability here in getting all three stars by using a limited number of balls, but most will likely begrudgingly pass on to the next level with the one or two awarded for the logical puzzle solving. 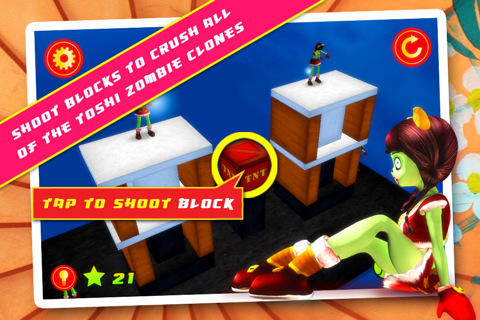 Which is why it’s too bad there are only 20 levels included here. While the game is free that’s nothing to complain about, but if they’re going to bump it up into the paid space, they’ll need to include at least another set of 20 to keep people happy. That shouldn’t be too hard to do, the last five or so levels of the game begin to explore the dynamic, multi-tiered pathways far enough that by the time you finish, you’ll be begging for more in the same key.

Visually, the game keeps the same simplified look of the original, all rendered in Unity and recognizable as such. That’s not a bad thing, but you’re not going to walk away thinking about anything other than the fact the graphics are functional. There is a lot of quirk mixed in for good measure, the zombies look like they’re trying to dance and they’ll moan awkwardly when you hit them with a ball, but overall there is a lack of the same weirdness the first one had, but that might just come from the lack of J-Pop dance sequences at the end of each level.

By the end of the 20 levels, Popstar Physics feels more like an add-on pack of levels for Save Toshi than a verifiable sequel, but considering it’s free for the time being, it’s difficult to complain. The new mechanics show a lot of promise and although the core remains the same, the switch from “save" to “crush" is interesting enough you’ll likely be begging for more.