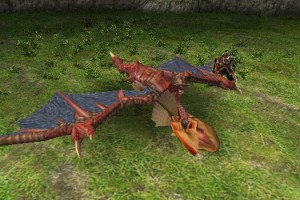 Monster Hunter: Dynamic Hunting is a competent hack-and-slash title from the studio that brought the actual mega franchise to market. That’s a good sign. But, while all the mechanics are serviceable, in the early parts of the game, combat seems to suffer from weird design decisions that slow the frantic pace of battle it tries to conjure.

Over-the-shoulder perspective fighting games are nothing new on the App Store. Chair Entertainment, however, possesses the crown thanks to Infinity Blade [$2.99], a sharp and fast-moving action joint that prioritizes sword control. In that, you can hack wherever you desire and the movements will translate to the screen. Hunting doesn’t do this. You can only swipe your sword in two directions: north and south and east and west.

This is… odd because Hunting wants you to hit specific parts of the humungous monsters that it puts in front of you. In this sense, the game sort of requires accuracy, but the lack of fine sword movement makes this lofty requirement hard to fulfill. Instead of dancing around a monster and hacking at its ankles, I’ve instead been rolling almost aimlessly in circles until I accidentally slash at a behemoth’s legs. 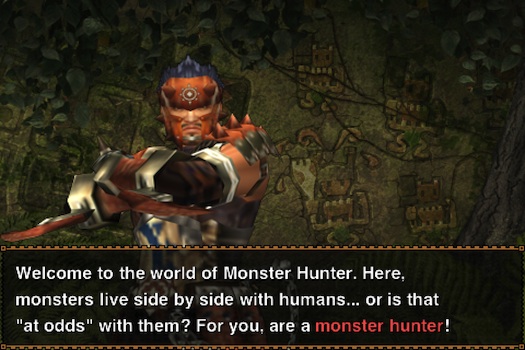 To be fair, the early game, at least, isn’t so concerned with where you hit the monster, so long as you make contact. That makes this concern moot to an extent, but I think you can understand some of the frustration I’ve been experiencing — I want to drill monster’s in their obvious ‘open’ places, but I can’t because I’m fumbling with a system not really built for you to exploit such fine details.

In addition to slashing, you can also pull off some defensive moves. By placing two tips on the screen, you’ll go into a guard pose. By swiping those two fingers, you’ll roll. If you slash after successfully pulling one of these moves off, you’ll perform a counter-attack, which are some of the most devastating moves in the game. 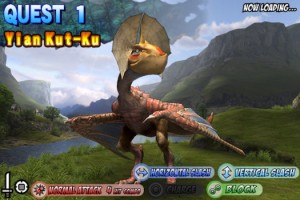 The study of monster habits is integral to the Monster Hunter experience, so that little fact nugget doesn’t come as much of a surprise. You’re supposed to know your foe and then act on its quirks or hesitations. And when you can conquer the sword and really get into the diving, guarding, and countering the game feels great — it clicks.

The loot and grind components are fantastic drivers in the early going. You don’t level up in this specific joint, but you do earn loot from monsters each time you defeat them, which can then be used to make even better weapons and armor. Some of the enemies in the game are absolutely vicious, so it relies on this hooking you. As you beat more monsters, you can unlock more weapons to build, so I’m looking at this as the “leveling” component. 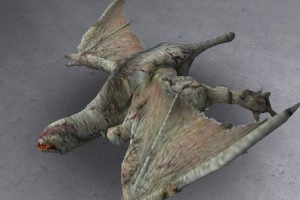 I think there is a hearty caveat that I should note about the guard and counter mechanics, though, and it ties into the game’s hearty UI. The entire bottom quarter of the screen is obscured by your health bar and the like, so when you place two fingers, you’re really eating up screen space and obscuring possible counter cues that may arise.

We’ll be doing a full review on Hunting in the near future and I encourage you to give that write-up a look. For this impressions piece, I’ve taken a narrow glance at the battle system in first “chapter," so you’re not getting the full story here.

Who knows? Maybe there’s a pivot point that can sway my opinion of the battle or maybe there’s good justification for the rigidness and design decisions. Definitely check back with us later to get the full run-down of what Hunting as a complete product.