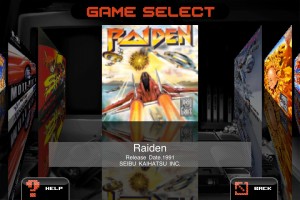 Hudson is doing a fantastic job of keeping a fresh batch of new games pouring into their excellent TurboGrafx-16 emulator app called the TurboGrafx-16 Gamebox [Free]. The app launched last December with a decent selection of titles, all of which could be purchased from within the app for $2.99 apiece with one rotating title per day available for a free timed trial. We really enjoyed the TurboGrafx-16 Gamebox in our original review, and within a couple of months a new selection of titles was added improving the game further.

Earlier this month, yet another update hit adding another 5 brand new games to the package, including the classic pinball game Devil’s Crush and the third entry in the Bonk’s Adventure series. Now, just a few weeks later we already have another new update to the Gamebox adding 5 more new games.

Likely the most recognizable of the titles is the vertically scrolling top-down shooter Raiden. Raiden was an absolute classic in the arcades a couple of decades ago, and remains one of my very favorite shmups of all time. The TurboGrafx-16 version is obviously highly scaled down from the arcade original, but while it lacks the graphical oomph it still contains excellent gameplay. Performance-wise, Raiden can slow down a bit when action gets intense on screen, but overall it’s pretty solid.

A far more exciting addition to the Gamebox, at least for me personally, is Dragon’s Curse. You may know it by its former name, Wonder Boy III: The Dragon’s Trap, as it was called on the Sega Master System back in 1989. This was one of my all-time favorite action/puzzle/platforming games back then, and it still holds up extremely well today. 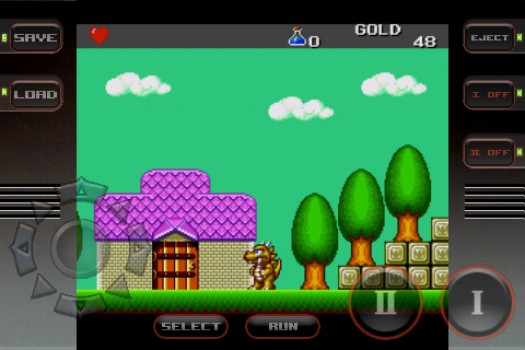 It has a Metroidvania vibe where you must take on the roles of different animals that each have unique abilities that allow you to access new areas of a huge non-linear world. There’s a number of different weapons, armors, and items to buy which adds a nice RPG element to the gameplay. Dragon’s Curse is colorful, clever, and just plain fun, and I’m really excited to have the game in my pocket to play through for the umpteenth time.

The three other titles in this latest update to TurboGrafx-16 Gamebox aren’t as familiar to me, but they may hold a special place in your own heart. These titles are: Shockman, Moto Roader, and Out Live. There’s plenty of other classic TurboGrafx-16 games I’m still waiting on too, like Keith Courage, Super Star Soldier, and Legendary Axe, so hopefully Hudson continues to crank out the updates. Currently, I think they’re doing a pretty darn good job, and the TurboGrafx-16 Gamebox continues to be a shining example of how to do emulators right on iOS.