Game Center isn’t that great. That was the first among throngs of intelligent thoughts that followed after my first few forays into Infinity Blade’s [$2.99] new “Arena” mode, which hit the App Store this afternoon as a free update to the core — and now reduced priced — game.

The second thought had something to do with the grim satisfaction I take from hitting people in the face with virtual maces. I’ve heard Infinity Blade likened to Punch-Out on several occasions. It’s a solid comparison, but I’ve never get the kind of cheap, visceral thrills from that joint like I do from Infinity Blade. Being able to hit people in face while dressed as trolls like I can now makes it all the more … er, fun. 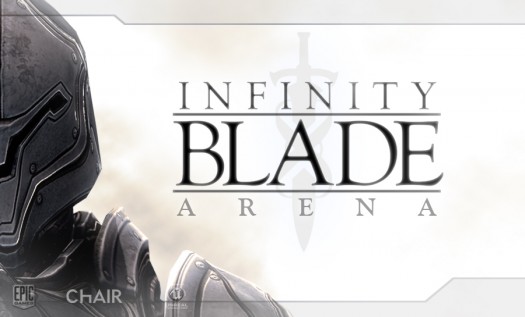 In a nugget, Arena pits you against another dude in a series of battles to the death. The victor is the person who wins the most matches. The twist is that you don’t always play as the human — you’ll also be forced to play as at least one of the game’s monsters.

It’s a cool setup, and for the most part, it works. You’ll feel like you’re playing against opponents who are much smarter and way more cunning. The trade-off is that nothing you do in this mode translates to the campaign. Carrying on with the things you’ve earned is central to the experience, so this decision does stick out for better or worse. 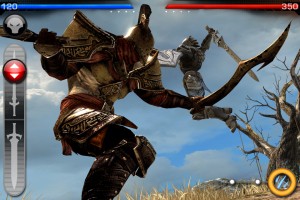 My third thought had something to do with Arena’s self-containment. Infinity Blade allows people to sink real money into the game in exchange for gold, so I trudged into Arena with a belly full of trepidation.

Alas, no worries; everything you earn in Arena is locked into the current match. You’ll also start with no items earned from the campaign, so every game is a fresh one — which is what makes the decision to have progression a puzzling one.

After each match, you’ll earn gold that you can then spend on shield, armor, weapons, or new body types if you’re a monster… but you’ll keep none of it after the match. Ideally, this self-contained faux-perk system creates an arms race against opponents, but it lacks the depth needed to make that friction meaningful. The customization options are lacking and everything seems way too easy to get. 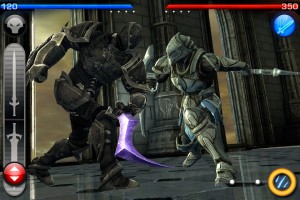 My fourth thought had something to do with how much I like trolls. I want to be the jerk troll clubbing pitiful humans in the face and I totally got to do that in Arena. Oh, and for what it’s worth, I’m having a blast doing it.

Beasts control much like the human with the added benefit of a slider bar that controls swing speed. There’s also a “Fury” bar that allows for increased recovery times. I think it might be a too technical for its own good, but you’ll get the hang of it in minutes.

Being a troll also offers a cool chance to look behind the curtain of enemy design. I feel like game creator Chair just ripped out its AI’s spine and sticks your hand up the monster. You get a distinct feel for how the enemies are designed to attack as the puppeteer. 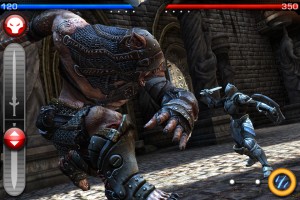 To access Arena, update your game and head straight into the menu option from the game. Be prepared to fiddle with Game Center; I’ve received countless errors and weird hang-ups thus far, but when you do connect, the multiplayer works really well.