When it comes to campy, over-the-top horror movies that should theoretically make good games, nothing really tops Army of Darkness. Despite its seemingly perfect fit, its cult following and its pedigree, there have been very few games based on the Evil Dead universe. Thankfully, Backflip Studios took on Army of Darkness: Defense [99¢ / HD] with their own spin on the castle defense genre slapped with a thick layer of fan-service paint.

At its core, Army of Darkness Defense is a casual castle defense title with light RPG elements. Despite those RPG elements, you’re not going to get a very deep experience here, but if you’re a fan of the series you’ll probably be happy with the end result. Most notable among the fan-fodder is the massive collection of voice clips found throughout — something around the ballpark of over 100 different clips from the movie are included and scattered randomly about. Even with that many clips in the mix, they do get a bit repetitive as the game moves on, but that’s what the mute button is for. 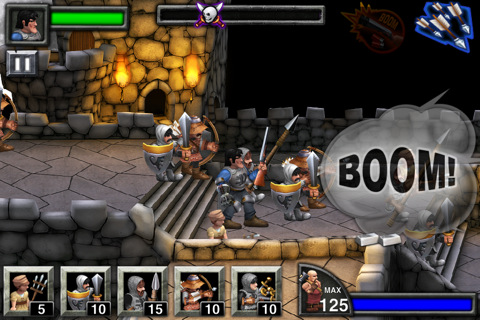 Visually, AoD Defense stays true to its inspiration as well. Where Army of Darkness ran with the slapstick elements from Evil Dead II, the game uses a cartoonish look to convey the same feeling. The same can’t be said for the menus and UI overlay, which aren’t exactly the most pleasant things to look at, but they function well enough.

The twist on castle defense comes in the form of allowing you direct control over Ash, the main character. It seems like a big step in the right direction, but considering you can only move him left or right and have little control over what he’s actually doing, it ends up being more of an exercise in keeping your brain entertained while you’re calling on backup troops than a big innovation. That’s especially true considering you’re basically stuck on a two-dimensional plane. 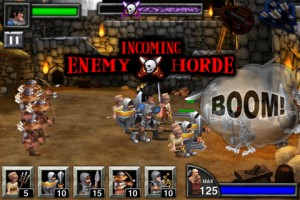 That plane is the cause of another slight problem in the game, balance. Since your troops will basically just walk forward and form a single-spaced, stacked wall, regardless of their type, it doesn’t matter much which troops you’re using. There are no counter-tactics at play here and if you happen to upgrade one of the early, cheap units to its maximum level, you can spam it against every enemy you run into with little trouble.

The game doesn’t push you to do otherwise either. There are probably certain units that are better against certain waves than others, but for the most part, an upgraded unit will do fine against anything it runs up against. Because you’re restricted to the 2D plane, you can’t stack units or coordinate a complex defense and for the most part, the combat feels slightly random.

If you’re especially lazy, you can utilize the in-app purchases to upgrade your units at your fancy, but as mentioned above, it’s not particularly necessary. At no point during the 50 waves did I feel the need to grind or like I didn’t have enough gold to upgrade my eleven different units enough to get through it. On top of standard unit upgrades that up the health and attack power, you can also upgrade Ash, his weaponry, a few different special skills and your castle’s defenses. 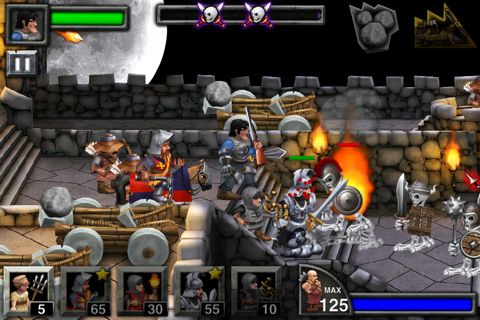 A standard wave pretty much goes like this: you’ll start with the intro screen where you’ll see the units that are part of the oncoming wave, you’ll pick your defensive units, then your skills and you’ll pop into the game. You’ll control Ash by touching the left or right of the screen and he fires automatically when you’re near an enemy unit. Your smithy will be forging iron, which can be used to call-in new units to your defense.

From there, it’s pretty much just making sure you’ve got enough backup to deal with the waves and waiting for the completion screen. It gets a bit repetitive over time and it would have been nice to see more diversity in the environment or the enemies, but the campaign is short enough (around two to three hours) that you probably won’t really notice.

By the end of it all, fans of the film won’t be disappointed with how Backflip Studios handled the IP. They are clearly admirers of the film and were able to create a game based in the AoD world that looks and feels like its inspiration all while including enough Easter eggs to appease fans but not so many that casual players will be turned-off. The RPG elements certainly add a layer of depth, but it’s too bad there is no real strategy to using them. At a glance it seemed like Army of Darkness Defense was going to offer more strategy and RPG than the usual castle defense titles, but it ends up being a bit shallow. It’s still an entertaining title and you’ll likely enjoy your time with it as long as you keep your expectations in check.