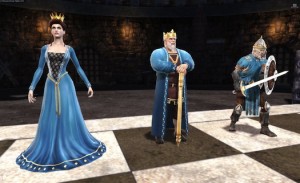 Remember Battle Chess? If not, no worries; it’s an easy pitch. Battle Chess is classic variant of chess in which its stylized pieces kill each other. It’s like the Mortal Kombat of chess basically, minus the skin and copious gore. Also, less “K."

I bring up Battle Chess because it’s coming back to PC, iOS, and “more” in the future, according to a new posting by developer Subdued Software. Specifically, you’ll see the PC version a little later this August and the iOS version “soon after” the fact, according to a Joystiq blog post about the revival.

Subdued Software’s Web site is not without content about Battle Chess — plenty of shots of the new game are available to gawk at and, hey, there’s even a features list towards the bottom of the page. According to it, expect the game to support online play, training, skill challenges, and a “combat vault” that’ll allow you to view your chess fatalities. What else could a man require?