Let’s start by making one thing clear, MaxNick’s Spider Jack [99¢ / HD] is Cut the Rope [99¢ / HD] reimagined slightly enough that it will appeal to the rope-cutting fans out there who’ve been dying for new levels, but certainly won’t convert anyone who isn’t a fan of physics based puzzlers. It’s also impossible to get through this review without comparing them to each other every step of the way.

It’s probably easiest to look at the few differences between the two games first before moving onto the similarities. Where Cut the Rope tasks you with delivering a piece of candy to little Om Nom’s mouth, Spider Jack wants you to deliver Jack the spider to his dinner. To do this you’ll be spinning you spider web out to knobs, using physics to swing around and eventually cutting the web to capture your dinner. The main difference is that you have to create the ropes before they’re cut here. Other than that, you’ll find a remarkably similar experience. 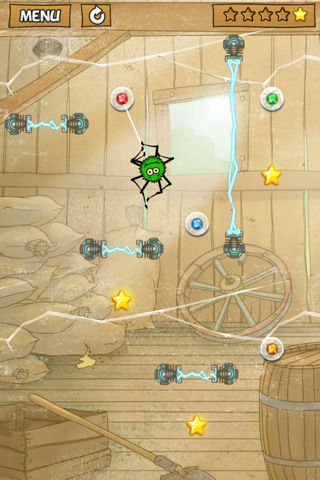 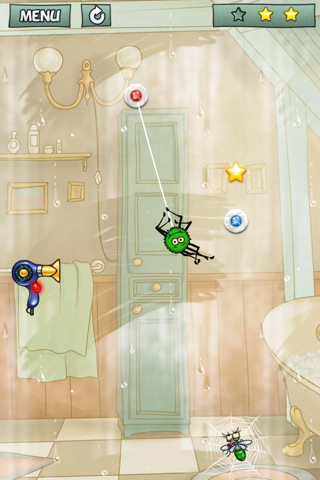 Spider Jack’s commonalities with Cut the Rope don’t just lay in its gameplay. The visuals are remarkably close, albeit not nearly as polished and the music is the same, quirky and upbeat style. There are also differently themed rooms where you’re tasked with completing puzzles by grabbing up to three stars scattered across the level. Before anyone cries out that it’s a clone, consider that Chillingo published both games, so clearly someone out there seemed to think the differences were strong enough, or maybe just didn’t care if they weren’t.

Unfortunately, the one thing the two don’t share is solid level design. Cut the Rope was imaginative and capable of introducing new techniques to keep the game interesting. Spider Jack’s 75 levels are considerably easier, which for anyone who struggled with Cut the Rope might be good news, but if you’ve already three-starred everything and are looking for more, you’ll be able to blaze through Spider Jack in around an hour with little trouble. That’s partially due to the lack of multi-touch puzzles — no two-finger swipes are necessary here and that alone makes it a considerably easier experience. Of course, in Chillingo style, more levels are supposedly incoming shortly.

If you played Cut the Rope, you’re not going to be surprised by the puzzle variety. Blowing air, electricity, timers, portals — they’re all here. The tutorial portions are nearly identical too. That said, it has some annoyances with its mechanics. Since you’re controlling a spider and not a falling ball of candy, some puzzles rely on you climbing up the web, but Jack moves so slowly and unpredictably it’s harder than it needs to be to get your timing right and it ends up feeling like luck more than skill when you do.

For those looking to show off their skills, there is full Game Center and Crystal support as well as the ability to gift levels to friends. This means you’ll be able to unlock five levels per stage for your friends if you’re in the giving mood.

All this is to say that Spider Jack does get the job done and if you find yourself itching for more slicing, cutting physics-based games, it won’t be a disappointment. The final chapter introduces the portal mechanic and even though it’s similar to Portal and Cut the Rope’s magic-hats, it’s probably the strongest part of the game. Hopefully in future updates MaxNick will take the unique portions and expand on them to create something wholly their own.