Sony’s half-hearted effort to get into the low-cost digital downloads space with the PSP Minis initiative has been disastrous. Its lead platform has been floundering at retail, and I’ve heard from several sources that its support structure is hobbled. That blows for everyone involved, but there is reason to celebrate Minis: good games have, in fact, made it to release. One of those being the ostentatious 2D, shoot-‘em-up called “Who’s That Flying!?” [.99]

Like Flying Hamster [$2.99 / HD] before it, Who’s That Flying!? has been ported to iOS devices and given a cleaner, larger look as well as natural-feeling touch controls. I missed out on the initial release of WTF, but I don’t feel like I did — this port is so sharp that I mistook it for being a native game. That’s really important to me as I become increasingly grumpier about a studio’s effort in this arena. If it’s not tight, get it out of my face, you know?

WTF begins with a trial — not of the tribulations variety, either. Think “Law and Order.” In Space. You’re Earth, one of the nine total super heroes charged with protecting its respective planet in the solar system. You’re in trouble because monsters have appeared on your planet, and the actual game-part of WTF unfolds as you illuminate this cape-clad jury. 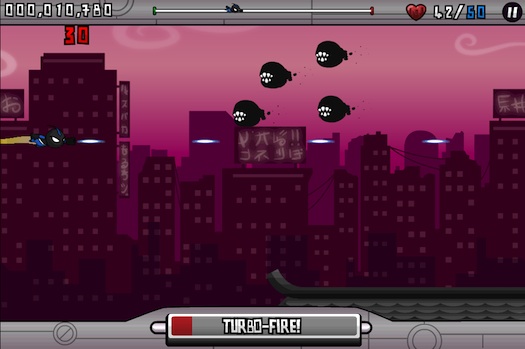 As with most shooters, WTF is straight-forward: Earth flies and can shoot bullets out of his arm, which comes in quite handy when he’s confronted against waves and waves of inky monsters that move in elaborate patterns across the screen. Each level takes place in a Earth city broken up into three different stages, the third of which has a boss that dwarfs but jives with the themes presented.

What I really dig about it isn’t so much the action as it is the lack of punishment. If a monster happens to crawl across the screen, a single health pip out is deducted from the city Earth is protecting at the time, meaning there’s a lot of room to mess up, recoup, and get back into the WTF’s frantic groove of evading and shooting. 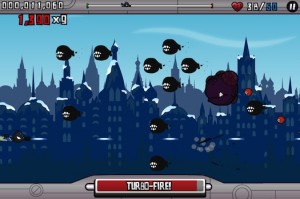 Also, Earth doesn’t have a health meter; when he’s hit with an enemy projectile, it simply stuns him and pulls him out of the action for a second or two. Being stunned, then, is an issue, of course — you can’t kill guys when you’re woozy, but it’s not a deal breaker.

Not to be dismissive, but there is a lot on action front there to like. There’s a simple, satisfying sort of strategy that goes into choosing appropriate targets and a lot of the larger enemies requires a good deal of dexterity to avoid their acid spit or frontal attacks. Plus, there’s a cool God of War-like mechanic in the game with the mid-level monsters; when you bottom out their health, you need to do a melee-based move that also wipes out a good portion of the enemies on the screen as well.

You can also earn power-ups as you chain together kills. These are pretty constant, too, which really help to establish the game’s frantic, fun groove. As a guy who requires a special “thing” out of his shoot-‘em-ups, I found this mechanic in particular to be an enticing reason to keep picking the game back up. 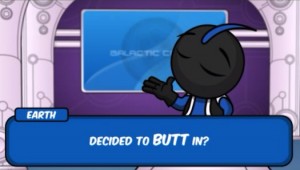 It’s implied by the purposeful acronym of the game, but I’ll go ahead and note it anyway: WTF has a certain sense of over-the-top humor that it injects in its action, as well as its cut-scenes and loading screens. It’s tiresome the majority of times, but it’s hard not to at least smile at the attempt to throw a little personality into a standard, genre-based game.

I’m walking away from WTF with some really, really positive feelings and thoughts. I love its assortment of mechanics and systems most of all — they’re tuned for guys like me who want more and don’t want to be beaten over the head for small errors. But I can also get behind its multitudes of levels, it’s super bright and colorful look, and its unique enemies that do provide a level of thought, strategy, and creativity on the battlefield.

I highly suggest you check this out if you’re in the market.