Straight up: I’m not a soccer fan because honestly, it’s hard to be a soccer fan in the USA. The whole non-stop nature of the game makes it really difficult for TV stations to inject advertising into the game, so aside from gym class soccer has yet to catch on.

We cool now? Great. Because here’s the thing about Soccer Superstars 2011 Pro [$4.99]: it’s not a simulation title, and it’s not an all-out action sports title, either. I like to frame it as a mix of the two, as it somehow marries the spirit of the actual game of soccer with video games antics, whimsy, and some light RPG elements that the Superstars series is known for.

For me, this is a great thing. I don’t need to know squat about soccer to dig what is being done in Soccer Superstars 2011, just like how I didn’t need to know anything about the actual game of hockey to be to enjoy the NES classic Blades of Steel. (Also similar to Baseball Superstars where you need to know nothing about baseball to get immersed in training up your super batter.) 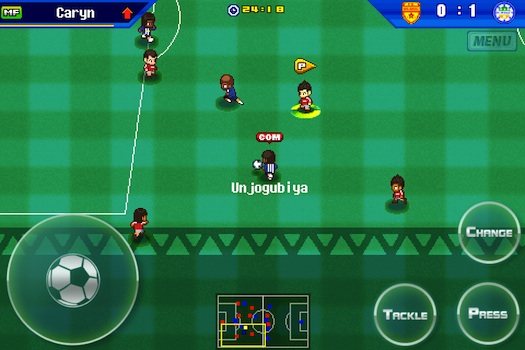 I think you get the gist, but just in case, think of Soccer Superstars as a lean arcade kind of sports title. You can only pick from a few teams, none of which offer real players or likenesses from the actual sport. In fact, each team sports a whacked out super player who can, quite literally, kick flaming balls into goals with the touch of a button.

Doing that requires a simple press of one of the three-to-four action buttons displayed at all times on the game’s not-so-beautiful HUD. There’s also a virtual analog stick present one the screen, too, which is how you move around your dudes on the field. Sadly, much like last year’s iteration of the game, the controls aren’t as precise as we wish they were as the virtual joystick just flat out feels clunky at times. 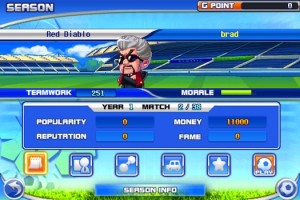 The fundamentals of soccer are all present and accounted for on the face buttons, which in turn, keeps the game simple: you can only, really, dribble and shoot as well as steal and tackle. Holding some of these buttons increases the strength of a move.

I’d like to say that there’s some sort of grand strategy to the play, but if there is, I haven’t discovered it. Most of my matches — and they’re all lightning fast — have been “pass and shoot” fests, which is to say, I’ve just been driving the ball to the hole and dominating.

So, I can with without a care. Frankly, I think this is stellar; I don’t want to bother with elaborate defensive or offensive strategies I don’t want to think soccer. I’d rather just put the ball in the hole. This game allows me to do that. Instant bliss! 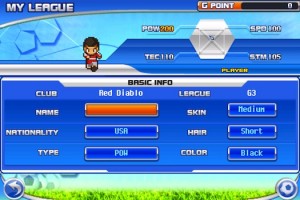 I can see this being a problem with people who require deeper experiences, so do keep away from this one if being a great Pitch Commander is necessary. Thankfully, there are tons of incredibly in-depth soccer simulators such as Football Manager Handheld 2011 [$9.99] that are worth a look if you want something substantially less simple.

Of course, there’s more: Soccer Superstars boasts a variety of different campaign type modes ranging from a full season to exhibition to Cup matches and the like. The season mode in particular is pretty hip: you play as a coach charged with construction the best team possible, and you’ll get a range of tools to do so. Similar to an RPG, you’ll train your players, exploit their strengths, and even go out to get other game-breaking special characters who can … oh, I don’t know, kick lightning balls into nets turned arcade voids.

The presentation of players is done in this really cute throwback SNES-style, full of color and rich with life. It lacks fine detail as a result, though.

One thing I really would like to see would be an improved out of game UI — the in-game menus are labyrinthine. Though this may be a design trap constructed around getting you to believe that you need to sink real cash into the Gamevil’s weird credits system, but just like the other Superstars games, this isn’t required to enjoy Soccer Superstars at all.

Overall, I really like what I’ve seen so far. If you enjoy soccer, or at least, want to get your game on in a cute, lighter kind of action-arcade soccer marriage, check this out. It might lack the fist-to-face antics of Blades of Steel, but it’s satisfying in its quirky, not-so-serious kind of way.