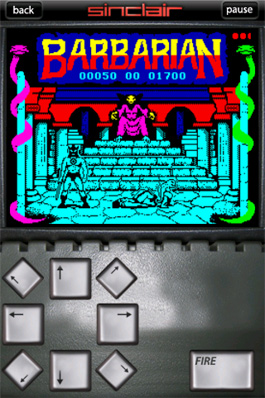 We’ve been tracking Elite’s retro game releases through its ZX Spectrum: Elite Collection [App Store] and associated apps for some time now. This weekend, Elite released another emulated classic that many gamers on both sides of the pond will recall fondly: Barbarian from Palace Software.

Barbarian (distributed in the U.S. by Epyx as Death Sword), originally released for the Commodore 64 in 1987, is a hack and slash fighter that places you, the barbarian, in a series of fighting pits on a mission to slash your way through warrior after warrior and ultimately defeat the evil wizard Drax and rescue the ample Princess Mariana. It’s all in the spirit of Conan. The game was noted for its realistic character animation (despite its simplistic graphics), considerable gore, and pleasant dose of wit. More than all of these, perhaps, it was noted for its racy box cover art featuring a bikini-clad Maria Whittaker, who had recently made an appearance as a topless Page Three girl in The Sun, and some dude. The outcry was dramatic.

Being a title running in Elite’s ZX Spectrum emulator, Barbarian: ZX Spectrum is, of course, the ZX Spectrum version of the game. Unfortunately, this was not one of the strongest ports. Due to limitations of the Speccy’s hardware, the actual play area and the characters within are rendered in monochrome. The detail is there, but the presentation feels pretty sparse. Another negative in this emulated iOS release is the control scheme. Despite Elite’s “iDaptive" control system, where button (or key) layout can be custom arranged, the types of wildly varying moves that you need to pull off in rapid succession to excel in this game are not particularly conducive to touchscreen-style D-pad play. Happily, the customizable controls let you move the D-pad out of the way of your character in landscape mode, but that doesn’t help with the feel of the controls.

Barbarian for the C64 and other platforms of old featured both a single player campaign mode (the quest to rescue Mariana) and a two-player challenge mode. It’s worth noting that the version presented here offers only a single player mode.

See a video of the game as played on the ZX Spectrum.

Barbarian: ZX Spectrum is a stand-alone title with versions for both the iPhone [link] and iPad [link], and will be appearing as part of a new download pack for Elite’s ZX Spectrum: Elite Collection [link] on Friday, when the number of available games in the collection will reach 108.

As a fan of what I knew as Death Sword on the Apple II back in the day, I was happy to see Barbarian arrive on iOS, even if it’s come in a non-native fashion. I’d wager that the happy customers here are going to be other oldschool gamers who have fond memories of gut kicks and decapitation as Palace delivered them. Those unacquainted will probably find this one wanting.