Last month we learned that Warner Bros. Studios and developer Square One had a remake of the classic arcade game Tapper (better known as Root Beer Tapper) in the works for iOS, and the game known as Tapper World Tour [99¢/HD] is now available in the App Store. The aim of Tapper World Tour is to keep the original gameplay mostly intact while adding a couple of bells and whistles and wrapping the entire package in the wonderful art of legendary animator Don Bluth. And Tapper World Tour succeeds beautifully at this, creating a game that retains the feel of the original while bringing it into the modern era. 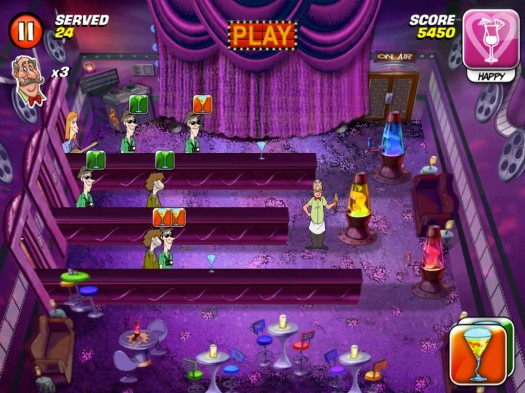 Eventually more gameplay elements enter into the mix. Thirsty drinkers will send empty glasses back at you when they’re finished which must be collected before sliding off the end of the bar and breaking. Also, some customers will leave you a tip at some position along the length of the bar which must quickly be collected amidst all the rest of the chaos to score some bonus points. You have a certain amount of lives for each level, and if you let too many glasses break or leave too many customers without drinks then the level is failed and must be tried again. 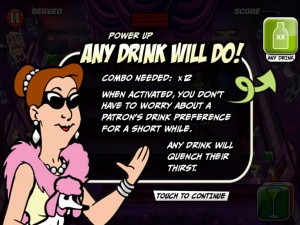 A couple of brand new elements have been added to Tapper World Tour which mix up the classic gameplay described above. In later levels customers will request specific types of drinks and you’ll have to switch to the appropriate one using an icon in the corner before serving them. Also, multipliers can be earned by successfully serving consecutive customers which will earn you power-ups like a special drink that guarantees you receive a tip or one that temporarily disables having to serve specific drinks.

Another new aspect is special entertainment shows that are enabled after a certain amount of time in a level. These activate a special sequence, like a sports game on TV or a bull riding show in a saloon, which draws the attention of the customers and causes them to temporarily stop, giving you a chance to catch up on orders. One new addition in Tapper World Tour which falls a bit flat are occasional mini games which can be completed after a level to add to that level’s score. These are simple derivatives of “3 shell shuffle” and “whack-a-mole” style games, and while they do break up the normal gameplay they aren’t very engaging. 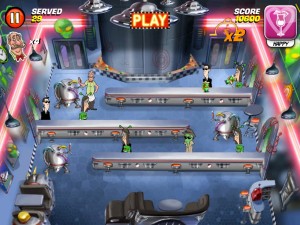 These new elements fit right in with the classic Tapper gameplay in Tapper World Tour, making for some frantic and extremely challenging fun. One thing that is a huge improvement over the original is the use of touch screen controls. Simply tapping the taps works incredibly well for serving drinks, and tapping on the screen to move between the different bar counters allows for much quicker reactions than you could get with physical controls. There’s an option for a virtual d-pad and button for a more traditional feel, but I definitely think you’re at a disadvantage when using this control setup.

Tapper World Tour contains a ton of content, with more than 40 levels in Story mode and an additional 50+ expert levels when Story is completed. There is also the Endless Shift mode, which is basically a survival mode that lets you play on any unlocked level for as long as possible until you fail. Each Story level has 3 stars to earn based on score, and every Endless Shift level comes equipped with its own Game Center leaderboard, though at this time it appears the Game Center leaderboard functionality isn’t working properly.

All of the gameplay and content in Tapper World Tour is complemented by the excellent art of Don Bluth and his team. The game takes place across 11 different cities in 3 different countries, each with their own unique drinking establishments and customers. The game just oozes all sorts of personality, and it’s hard not to just sit back and enjoy what’s happening on the screen during play. The fact that the gameplay is so solid just serves to enhance that enjoyment. If you were a fan of the original Tapper games or if you enjoy a good fast-paced arcade experience, then Tapper World Tour will satisfy.

Note: Some players in our forums are reporting that the game is unplayable on their device due to a graphical defect. This issue appears to affect 4th generation iPod touch and original iPad owners as far as we can tell. I had absolutely no issues with the game on my iPhone 4 or iPad 2, and a 1.1 update is in the works to fix these issues and will be released as soon as possible.