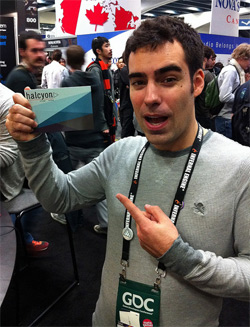 On our last day out at GDC, I spent some time browsing the many indie titles on display in the Independent Games Festival (IGF) area of the show floor. One of the iOS titles I saw on display is the excellent rhythm puzzler Halcyon for iPad [link] that we reviewed back in December. I spoke with Kurt Bieg at the Halcyon booth who showed me a new title that he and Halcyon‘s developer Zach Gage will shortly be bringing to the App Store, the platform color-matching game Monster Jam, from Simple Machine.

In the world of Monster Jam, the king loves jam so much that he’s eaten up every last piece of fruit in his kingdom. As chancellor, it’s your job to put a smile on the king’s face and get him his jam. Luckily, you’ve got a machine that can turn anything into jam. And, it turns out, the king’s favorite jam of all is jam made out of monsters. Monster jam, if you will.

And, so, the task at hand is to collect monsters for jamification. The game presents a series of platform screens full of monsters of various types and colors wandering about, across a series of different environments. In order to collect a group of monsters to put through the process, they must be separated out so that each platform only holds monsters of like color. Once all monsters of a certain color have been herded onto a given platform, off they go. Kurt, who walked me through the game, explains the gameplay during the following video demonstration.

Kurt and Zach are working on Monster Jam with Ramsey Nasser and Chris Driscoll, who did the graphics.