Let’s be real, here: Chair Entertainment could toss out a fart app on the App Store and make millions upon millions of dollars. Its previous game, Infinity Blade [$5.99] , is hot and people tend to flock to follow-up titles — regardless if they’re good or not. Chair wouldn’t sink that kind of money grabbing, though. That’s not how the studio rolls. Good design is tops, which is why we probably won’t see a Shadow Complex for iOS.

“I still cannot think of a way that we’d be able to bring over the precision controls [to touch screen devices] that Shadow Complex needs to be amazing," Mustard told Euro publication Eurogamer in a recent chat. “If you or any of your readers have some amazing control scheme idea that would work on a touch screen, let me know.

A few months back, Mustard kept the idea of Shadow Complex for the iOS open as a possibility in a conversation with us. If you read between the lines in the above, the man is still doing that. But, I think he’s becoming at least a little more frigid on the idea of a touch version of the Metroid-style action title, as he still hasn’t figured out a way to translate the game to iOS. 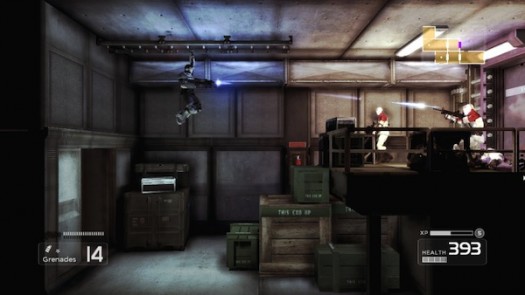 So, will we see Shadow Complex on iOS? No, probably not. It was a game made for the controller and the iPad and iPoud Touch, as miraculous as they are, do not have on-board, physical means of tactile control. That doesn’t mean we won’t see a Shadow Complex runner or a turn-based RPG, though… Oh, crap, I just got myself excited!