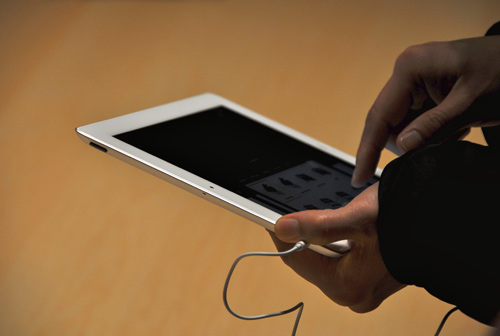 To the surprise of most, Steve Jobs, who is currently on medical leave from Apple, took the stage himself to unveil the successor to the company’s hugely popular iOS-based tablet. Jobs unveiled the new tablet to the gathered media, detailing the various innovations Apple’s engineers have rolled into this new, most powerful iOS device.

The iPad 2 is physically similar to the original iPad, but with a few notable changes. The new unit weighs in at 1.3 pounds, lighter than the original 1.5 pound iPad. It’s 33% thinner than the original unit (8.8 mm vs. 13.4 mm) — that’s thinner than the iPhone 4. Despite its new, svelte enclosure, the iPad 2 manages to hold onto the 10 hour battery life of the original thanks to a reengineering of the battery, says Apple. Front and back cameras have been added, as well as the FaceTime and PhotoBooth applications. And, the iPad 2 will be available in both black and white versions (fascia color) and in both WiFi-only and 3G versions — on both the AT&T and Verizon networks — on day one, which is March 11 in the states and March 25th abroad. An updated iOS 4.3 will also be landing on March 11. 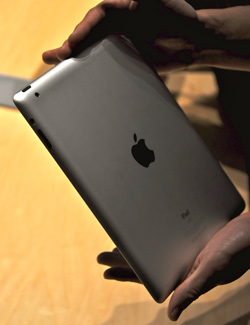 The changes don’t stop there, and this is where things get very interesting for iOS gamers. The iPad 2 features a new CPU, called the A5, that contains two processor cores as well as a dramatically improved graphics unit that Apple claims is capable of up to 9x the performance of the iPad’s (and iPhone 4’s) GPU. A likely candidate for the GPU used in the A5 is the PowerVR SGX543 which is capable of pushing 35 million polygons per second at 200MHz and one billion pixels per second. The SGX543 is able to run in multi-core configurations and supports OpenCL for offloading computation to the GPU core(s). A gyroscope sensor has been included, as well, which, of course, enables more precise reading of the unit’s movement in space.

Even without solid confirmation of the A5’s exact GPU configuration, it’s clear that the iPad 2 is a dramatically more powerful mobile gaming machine than any of the current iOS devices. This was evidenced by the impressive demonstration of the new iMovie and Garage Band apps during today’s event and even in the few minutes we spent in the hands-on session. 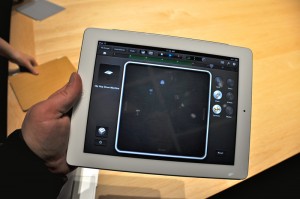 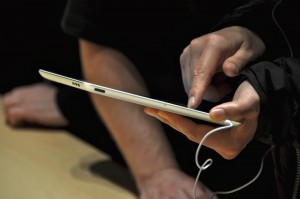 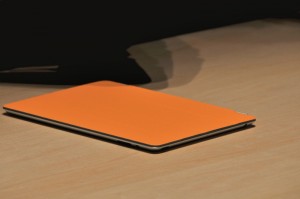 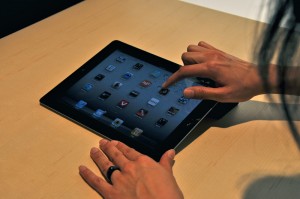 Apple allowed the media to spend some time trying out the new iPad 2 in a hands-on session following the morning’s presentation. The first thing I noticed about the iPad 2 in my time with the unit is that it conveys an overall “smoother" feel, with the outer aluminum shell being slightly receded at the edge of the polycarbonate face plate. Playing into this was the reduced weight and thickness, which is readily apparent — it definitely feels like a less substantial device, while maintaining a very solid, rigid feel. The new apps, which are very heavy on animation, as wall as iOS in general felt very smooth and responsive. I did a bit of text entry on the unit I was playing with, as lag during text entry is pretty much my only iPad gripe, and found no lag whatsoever. Unfortunately, the test device I used was not heavily loaded with games to try out, but there is no reason to think that virtually every title in the App Store won’t benefit from the iPad 2’s more powerful hardware.

And the Smart Covers — they are just brilliant. I couldn’t stop snapping it on and off the side of the iPad 2. I’m sure other tabletmakers have already begun sketching out copy designs.

Steve Jobs and the other members of the iOS team that took the stage today made frequent use of the term “post PC" to describe the iPad 2. It’s an ambitious term, certainly, but based on what was demonstrated today and looking at the hardware sitting under the hood of Apple’s new tablet, it’s not a term I feel inclined to laugh off.