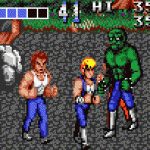 Hold on to your butts — Double Dragon is coming to the App Store. Publisher Aksys Games just gave us a heads-up about Double Dragon iPhone, which is an enhanced remake of the original arcade joint that’ll feature new sprites, new animations, new enemies, new attacks, and even some extra special hidden goodies, all brand new to the game. The best part? It’ll hit later this March.

Brizo Interactive, the team who handled Double Dragon for the Brazillian launch of the Zeebo, is developing this port. And while I’ve got zero experience with the Zeebo port, I’d imagine these dudes, at the very least, know their Double Dragon by now. (If anyone reading actually owns a Zeebo and has played Double Dragon on it, we’d love to hear about it.)

Control is the first thing that jumps to my mind when I think about the brawlers of another age coming to our new-fangled handhelds, but Aksys insists that the change of control won’t be an issue due to Double Dragon’s device-specific combo system that will accompany an in-game controller. Also, you’ll want to grab a pal — Bluetooth co-op is confirmed. Neat!

Note: We’re still digging around for assets. What you see above is just another port of the game, not this specific version. We’ll either update this story when we get screens or video, or write up a new post depending on the timing.

Update 1: Here’s a video of Double Dragon for the Zeboo:

Again, we’re not sure how closely this will resemble the iPhone version, but it’s interesting none the less.

Update 2: Here’s the official trailer for the iPhone game:

We’re not really sure what to make of this, as the controls look to be in line with what we’ve seen from Sega and other ports of classic games originally designed for a physical control. Regardless, we can’t wait to give it a try.