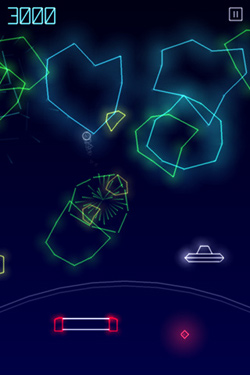 Early arcade games were pretty much all about a very simple play mechanic that just worked. Appreciation of such simplicity in gameplay is a big driver of the growing retro gaming crowd — that and nostalgia. Two games from back in the day that delivered such gameplay are Asteroids and Breakout. Simple, addictive. iOS developer Coolpowers has endeavored to combine both of those formulas into the same game with his recent release, Breakeroids [App Store].

Breakeroids is, as it’s name might suggest, a mashup of Breakout and Asteroids. It works like this… The upper three-quarters of the screen is a pretty standard Asteroids-like field of asteroids drifting about the play area, with the occasional alien saucer passing by. The lower quarter of the screen contains a Breakout-style paddle, separated from the asteroids by a multilayer convex shield.

As the game begins, you fire a ball up towards the asteroids in an effort to break them into smaller and smaller pieces, eventually eliminating them. Power-ups (thank you, Arkanoid) descend occasionally, for better and for worse. The aforementioned shield keeps the asteroids (but not the alien saucer’s bombs) from passing into your paddle space — but with each missed ball, one layer of the shield drops off. You start with three shield layers, but eventually (for all but the perfect player) that drops to two, then one, then…none. And, once your shield is gone, the first time an asteroid passes off the bottom of the screen, it’s Game Over. You get a full, new set of shields with each level and, in classic arcade fashion, there is an infinite number of levels. And the whole scene is rendered in beautiful, glowing retro vectors that support the Retina display and, at that resolution, look as if they’re being rendered onto a proper vector monitor.

Breakeroids is a lot of fun. One the one hand, it’s a pretty simple game, though a little more complex than either Asteroids or Breakout alone, understandably. But keeping track of what can and can’t pass through that shield when the action gets hectic can make for a rather intense experience. 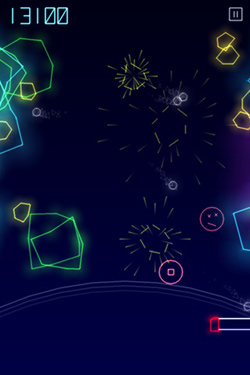 My only complaint about the game is the generally lengthy process of smashing that last, tiny asteroid on the playfield. With it and your ball both in motion, it can be a bit of a tedious process to get to the next level. But it’s not a deal breaker. And, in fact, a few deal sweeteners will arrive shortly, when the game sees a free upgrade to a universal app, adding native support for the iPad’s larger screen, and gets a same-device multiplayer mode.

Breakeroids uses swipe controls for the onscreen paddle, and both OpenFeint and Game Center are supported for online leaderboards and achievement tracking.

If you’re the kind of gamer that digs Asteroids and Breakout and are into the retro aesthetic, Breakeroids is one you’ll probably want to grab. Our readers are having a good time with it, so far.