Not to toot my own horn, but I totally (almost) called this earlier today. Sure, I guessed The Eagle instead of Rio, and I was being sarcastic, but I’m going to go ahead and add yet another point to the ol’ Hodapp crystal ball score board regardless. What’s all this madness about anyway? Well, moments ago Rovio Mobile unleashed a new Angry Birds trailer to the world, revealing that the next installment of Angry Birds is going to be Angry Birds Rio, which will come packed with 45 exclusive levels which sound like they’re going to be set in the Rio universe with more content coming via updates. 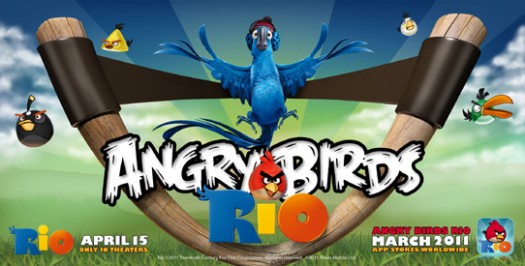 Rio is an upcoming movie from the creators of Ice Age. The movie follows the adventures of two blue macaws who go on an adventure, get captured, and do all those other things that typically happen in animated movies where animals talk. OK, I admit, I actually kind of want to see it because I enjoyed Ice Age (specifically, Scrat the sabre-toothed squirrel) a little more than an adult probably should. Check out the trailer. After you watch that, get a load of this all new Angry Birds Rio trailer, which arguably is even better than the Rio trailer:

No word yet on whether this is going to be free or paid, but since Angry Birds Rio is basically a marketing tool to promote a multi-million dollar movie, I’m going to lean towards the free side of the spectrum. That’s purely speculation on my part, but the Hodapp crystal ball has been freakishly accurate lately.