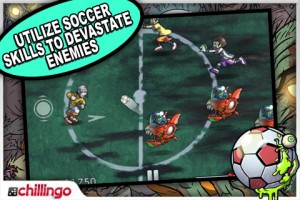 When Pro Zombie Soccer [Free] was first released last summer, it was by far one of the most anticipated games on our forums. Developed by Super Awesome Hyper Dimensional Mega Team, Pro Zombie Soccer is an amusing spin on zombie slaying, in that you play as a soccer player named Jax and take aim with a soccer ball, kicking it in to legions of zombies. We explained in detail how this works in our review, but here’s the basics:

By swiping up and down with your left hand you control Jax’s shot angle, as you take aim at the approaching decaying horde. Releasing your thumb will let fly a thunderous kick, tearing apart zombie limbs with abandon before the ball graciously returns to your boot. It’s a simple game mechanic that belays some pretty frantic action, particularly in the later game. Kicks can be charged by holding down your thumb before releasing, resulting in a power shot that is necessary to kill certain zombies. …Read More

Chillingo recently dropped the price of Pro Zombie Soccer to free to celebrate the launch of its iPad counterpart, Pro Zombie Soccer Apocalypse Edition [$1.99 / Lite]. The Apocalypse Edition seems to play identical to the iPhone version with the main difference being how much more you can see on screen at once. Like some HD versions, this one opts to use the additional screen real estate and resolution to keep the game elements the same size, and instead just display tons more at a time. This allows for some pretty crazy zombie battles as the screen gets completely filled with undead.

If you already own the iPhone version (or are downloading it free today), I’m not entirely sure how much reason there is to spring for the upgraded Apocalypse Edition. The new high resolution art looks great, and it’s cool having more zombies on screen, but the gameplay is largely the same. Either way, you should totally download Pro Zombie Soccer while it’s free, and if you’re enjoying it on your iPad, consider grabbing the Apocalypse Edition.