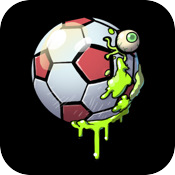 After a tumultuous release, where Apple seemingly played yo-yo with its iTunes availability, Pro Zombie Soccer [App Store] is finally here to stay, and aren’t we glad for it! Comfortably one of the more anticipated titles here at Touch Arcade, Pro Zombie Soccer is developed by the 6-man operation at Super Awesome Hyper Dimensional Mega Team, whose founders have notched titles such as Plants vs Zombies and Worms into their belts.

That pedigree shows from the start– particularly where the artwork is concerned– an outstanding PvZ-stylized canvass of highly detailed, inked environments and characters make up the world of Pro Zombie Soccer. A world filled with the Zombification of everything from burly meat-cleaver weilding butchers to schoolgirls to riot-shield weilding zombie swat teams. And a lone, street-kid with a love of the world game. 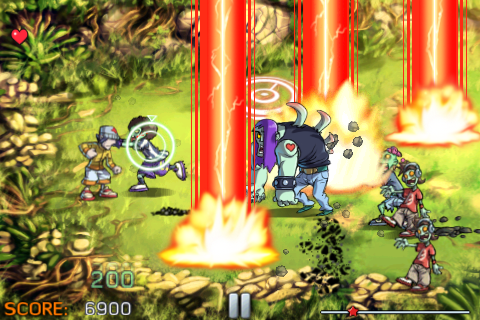 The soccer-inspired gameplay of Pro Zombie Soccer begins on a stage very familiar to anyone who has played PvZ (and let’s face it, who hasn’t?). Zombies attack from the right of the screen, lumbering towards your lone hero armed only with a round ball at his feet. That’s where the soccer gameplay starts and ends though, with the game playing out more as a sidescrolling shooter from thereon in.

By swiping up and down with your left hand you control Jax’s shot angle, as you take aim at the approaching decaying horde. Releasing your thumb will let fly a thunderous kick, tearing apart zombie limbs with abandon before the ball graciously returns to your boot. It’s a simple game mechanic that belays some pretty frantic action, particularly in the later game. Kicks can be charged by holding down your thumb before releasing, resulting in a power shot that is necessary to kill certain zombies. 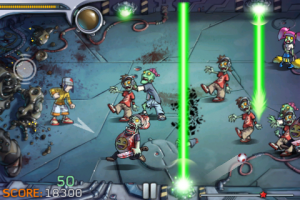 The Zombies themselves have a range of personalities, and though most can be killed by kicking the ball into their heads (successive headshots build multipliers that are critical to hitting the highest echelons of scores), some require a more reasoned approach– our favorite being the gargantuan, viagra-induced zombie that requires a ‘nutshot’ to take down. Ouch!

There are three powers available to Jax as he builds up momentum; the lightning kick; the piercing kick; and the indomitable Laser attack (which sees Jax fire a kick into the heavens to knock an orbital laser off-course to reign destruction on your Zombie adversaries). Though they do alot to disperse the otherwise straightforward gameplay, we were a little disappointed to see them made available so early on. Spreading their introduction across more levels would have made their individual usage a little more special. As it is, you have access to all three from very near the start, and so the gameplay tends to get repetitive as it is almost always best to resort to the room-clearing laser attack.

The plot and level mechanics do somewhat remedy the repetitive gameplay. Just as levels start to feel same-ish, a well-placed surprise pops up that turns the game entirely on its head. One such instance sees an entire level devoted to the piercing kick, a bloodbath resulting as a million zombie limbs explode all over the screen. These aren’t the exception to the rule either, as from halfway through it is clear that each subsequent level continues a headlong run into the realm of insanity. 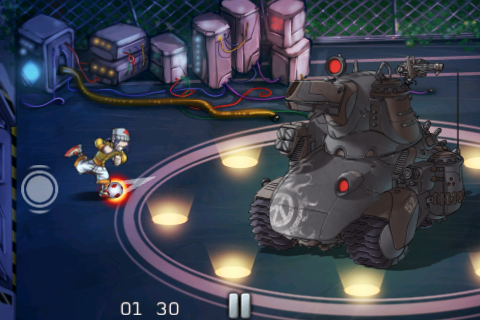 There are 20 levels all up in Pro Zombie Soccer spread over 8 different environments. The levels can be played through in about two hours, which unlocks a hardcore mode (which pits you against way more zombies) and a Zombie Odyssey, survival mode. Though it’s not the most content-heavy game out there, if the story mode was any longer it might have taken away from the game rather than added to it. Certainly any additional levels (if they are added as DLC) would need new gameplay mechanics to keep them interesting.

All told, Pro Zombie Soccer injects something a little different into the soccer games we’re being bombarded with leading into the World Cup. Its PvZ feel is just as much a reference to its great artwork as it is to its quality finishing. Hardcore mode should provide just enough challenge for those who breeze through normal mode, and Crystal integration ensures all your scores are recorded, and your actions in-game are rewarded with craft achievements. What really makes Pro Zombie Soccer stand out in the end though is its entertaining story sequences and gameplay tie-ins, and a finale that is just plain epic. At only $0.99 (limited 66% off World Cup sale), it’s a good time to pick it up.

Note: For those of you toying with OSi4, an update is already in the pipeline to resolve current errors with the yet-to-be-released OS and PZS should be ready to go for it soon.