One of my favorite things about the App Store is how a tiny gem of a game can seemingly pop up out of nowhere and blow me away with how fun, unique, and inexpensive it is. Such is the case with Pocket HalfPipe [99¢], the first iOS game from developer NaffRobot. Pocket HalfPipe is exactly what the name implies – a halfpipe skateboarding game featuring really intuitive controls, stylish graphics, and a decent amount of content that fits snugly in your pocket. There’s a neat level of customization that makes it feel personalized, and even though the game is a bit basic overall the fun factor is through the roof.

Pocket HalfPipe features a single outdoor ramp for you to skate on. You’ll start by naming your skater (male only, sorry ladies) and then choose from a selection of skin, hair, board, and clothing options to deck out your dude how you see fit. There aren’t very many customization options to begin with, but as you play a number of new items become available. You can also click on a boombox that lets you play music from your iPod library during the game. There isn’t any regular in-game music, but there’s something very nice about listening to just the sounds of your board as you skate if you don’t feel like playing your own music. 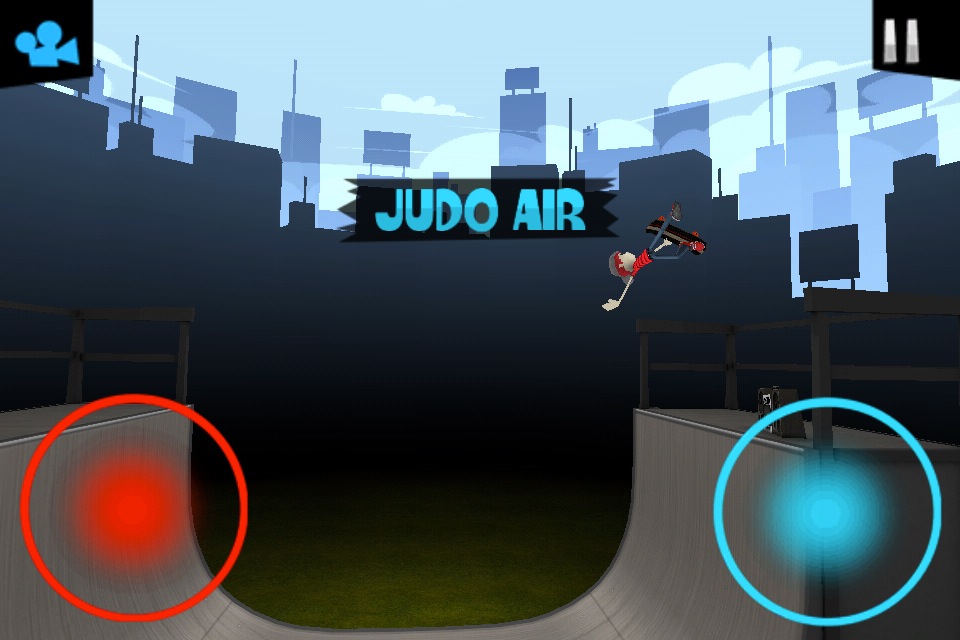 Once you’re satisfied with the look of your skater, a very nice tutorial introduces you to the slick control system in the game. It’s essentially a dual-stick setup, with the left stick controlling speed and flip tricks and the right stick controlling grabs. If you’re old like me, you may have been a fan of Skate or Die 2 on the NES and gameplay here feels very similar to skating the halfpipe in that game. Just as in real skateboarding, you gain speed by pumping the transitions, or in gaming terms holding down the left stick and lifting it up on the parts of the ramp that curve from flat to vertical. There’s a nice rhythm to how this works and after a bit of practice you won’t have any trouble gaining speed and launching into the air. 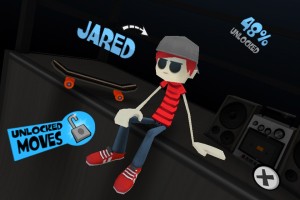 Once airborne, you will press the right stick and push it in different directions to perform different grab tricks. Letting off the stick takes your hand off your board so you can land safely back in the ramp. Similarly, flip tricks are performed by pressing the left stick and flicking in a direction, not totally unlike another awesome iOS skating game Stick Skater [99¢/Lite]. The board will begin flipping after you’ve lifted your thumb up from the flick, and pressing down on the left stick again stops the flipping and brings the board back to your feet so you can land back in the ramp. If you don’t release your grab or stop your flip by the time you land back in the ramp, then you will bail in a comical and painful looking fashion.

The other aspect to skating is spinning in the air, and this is something that doesn’t quite control as well as the rest of the game. Spinning is handled by tilting the device, and your position is smartly calibrated before you drop into the ramp for each run. What makes spinning awkward is that you have to actually tilt the device before launching into the air, while you’re still on the ramp. This sort of preplanning for rotations doesn’t flow that well with the rest of the game. With practice, you get used to it and it’s not much of a problem, but it doesn’t always feel consistent and some alternate method might be nice. 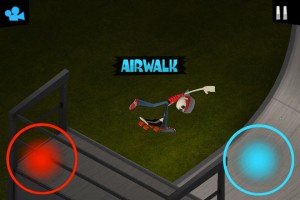 Just skating in Pocket HalfPipe is a real joy, but there are also some nice modes to utilize your skills in. There’s a Free mode where you can just skate for fun without any time constraints or obligations. Then there’s Countdown mode, my personal favorite, where you try to earn the highest score by busting as many tricks as you can in 30 seconds. Survival mode gives you just 15 seconds on the clock, but landing tricks adds additional time and instead of scoring points you try to see how long you can keep playing before the timer runs out. Finally, there’s a Big Air mode where you must simply try to launch as high as possible in the given time.

As you play through these different modes and achieve certain scoring goals, you’ll unlock a bunch of new things like additional clothing items, skateboards (including the wonderful Enviroboard 2000), skill improvements, and many new tricks. It won’t take long to unlock them all, but it’s fun while it lasts. The pure skating element in Pocket HalfPipe is so good though that even once everything is unlocked you’ll still find yourself playing just for kicks, or to compete for better scores on the Game Center leaderboards. The graphics are simplistic but stylish, and look sharp on the Retina Display. There’s only one backdrop to skate in which isn’t a big deal but additional environments would be welcome.

Honestly, any negatives I can think of about Pocket HalfPipe are quickly forgotten once you get your thumbs on the board. It’s just so much fun. Some additional variety in the form of tricks, clothing, or environments couldn’t hurt, but what’s here already is still really solid. Players in our forums have been raving about Pocket HalfPipe, and whether you’re into skateboarding or just naturally enjoyable gameplay it’s definitely one you want to check out.