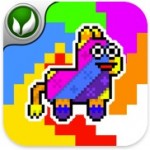 Well, it’s that time again. Dedicated readers of TouchArcade should know that we have a penchant for posting about silly or absurd games every now and then. They aren’t always the greatest games known to Man, but with the App Store economy being the way it is sometimes spending a dollar or two on a game that will give you some laughs is totally worth it. The latest example of this is Rainbow Pony [99¢]. I could almost stop right there, as anything called Rainbow Pony must be worth at least a dollar. But for the sake of thoroughness, I’ll go ahead and explain the delicate inner workings of the game.

Rainbow Pony plays a bit like Solipskier [99¢] in that you must guide your majestic steed along a wave of rainbow that you direct with your finger. Along his (her?) magical journey, the Rainbow Pony will collect various items spread throughout the game. Each arrow icon you collect will increase your speed, and each bomb you hit will slow you down. You can also collect delicious candy and teddy bears, though these seem to serve no purpose other than to increase your own personal happiness a tiny bit. 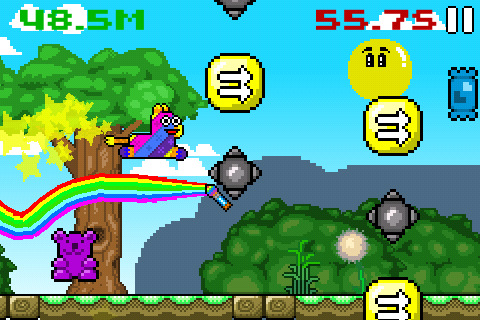 The game is played over 3 modes – Normal mode has you racing for a finish line in as little time as possible, Survival sees how far you can make it before hitting a bomb and instantly dying, and Timed mode sees how great of a distance you can achieve in a set amount of time. All of these modes contain their own individual high score leaderboards in OpenFeint, so you can compare scores with your many friends who will undoubtedly want to pick up Rainbow Pony once they see you playing it.

Visually, Rainbow Pony is pretty nice. It employs an 8-bit graphical style and retro-chiptune soundtrack, complete with grating, high-pitched coin collecting chimes. The game is really bright and colorful, though my one gripe here is that the Rainbow Pony looks a lot like a llama piñata to me. When I first saw the screenshots, I was almost certain this was some sort of retro 2D demake of Viva Piñata. Honestly, there’s almost nothing better than watching the Rainbow Pony frantically galloping along, staring at you with a blank look on its face. It just makes me smile every time.

So in the end, Rainbow Pony is a pretty clever idea that is only executed marginally well. The controls and fluidity of the game are a far cry from the nearly flawless feel of Solipskier, though they do work well enough to enjoy the game. The biggest problem to me is the lack of spacing with obstacles in the game. There’s no real warning of what’s coming, and things can speed up so quickly that you can’t avoid hitting bombs over and over again. I found myself having more fun trying not to hit the speed icons and just collect the yummy candy at a leisurely pace.

Still, the gameplay is fun enough to have a go at once in a while and for a dollar you can have a Rainbow Pony in your pocket, which is a statement I’m proud to be able to say in my lifetime.