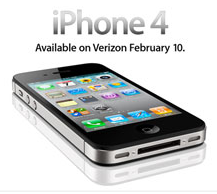 After what seems like years of rumors on the subject, Apple and Verizon announced a new CDMA Verizon-compatible iPhone today. This new version of the iPhone seems to be identical both in storage capacity and price, with some minor modifications made to the antenna to support Verizon’s CDMA network.

Verizon will begin taking preorders for the iPhone 4 on February 3rd, and they’re expecting to have them available on February 10th. Just like its AT&T counterpart, the Verizon iPhone will sell for $199.99 for the 16GB version and $299.99 for the 32GB version. Both require a two year contract.

Currently, aside from CDMA Verizon connectivity, the Verizon iPhone also comes packed with functionality similar to a MiFi or other 3G hotspot device. Up to 5 devices will be able to share its 3G connection. Something to keep in mind, because this is a CDMA device, it is limited to using only voice or data at once. Placing a phone call will suspend data transfer. Of course there’s no word yet regarding whether or not AT&T will match this functionality, but as someone who carries around a MiFi everywhere I go, I certainly hope so.