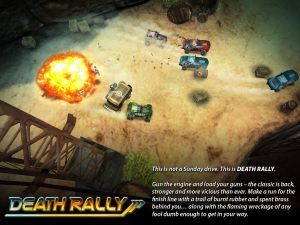 While it may not be a name most people recognize, the original Death Rally is a top-down racer with a ton of history behind it. The game was originally released and published in 1996 by Apogee, developer of Duke Nukem 3D and publisher of various classic PC titles such as Wolfenstein 3D. Death Rally was the first game developed by Remedy, who later went on to create the Max Payne series, and more recently, Alan Wake. This isn’t just a simple remake either, Remedy has enlisted the help of both Mountain Sheep, creators of Minigore [99¢ / iPad], and Cornfox & Brothers, a game studio filled with industry veterans.

Death Rally is a top-down racer filled with vehicle upgrades and combat. In fact, recently the original PC version of the game was re-released as a free download [Direct Link]. Check out what the remake is going to look like when it launched on the iPhone and iPad in March:

Pricing isn’t being discussed yet aside from it being “similar to other high-end games," so we’re thinking that means anywhere between $4.99 and $9.99. Either way, we can’t wait to get our hands on the game, and March really can’t come soon enough.