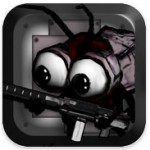 Back in October, we posted a preview video of Bug Heroes from Foursaken Media, developers of the popular iOS title N.Y. Zombies [99¢]. The aim of Bug Heroes was to provide a dual-stick shooter combined with elements of tower defense, as well as multiple playable characters who could also level up and upgrade in a somewhat RPG fashion. It sounded like a tall order for an iOS game, possibly too tall, and we were anxious to get our hands on the game to see how it would pan out. Today, Bug Heroes [$1.99] has launched in the App Store, and not only has Foursaken come through with all their promised gameplay variety but they have surprised me with just how remarkably well it all works together.

The bulk of Bug Heroes takes place in the Adventure mode. Here you battle in 4 different environments using a combination of three different characters as you defend a stockpile of food from an onslaught of hungry insect enemies. Money is collected as you defeat enemies which can then be used on various types of upgrades. You can add several different types of turrets to your food pile to protect it while you are away, or you can buy better weaponry to increase the offense of each character. Gameplay involves exploring each environment to collect additional food to add to your stockpile while simultaneously fending off enemies. The game ends when all three characters die or your entire food reserve is depleted. 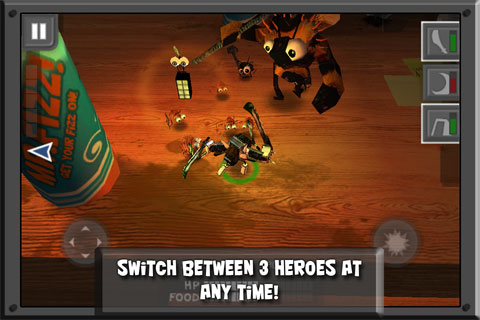 The three characters in Bug Heroes each have their own strengths and weaknesses, and play quite differently from one another. There’s the ant who has average strength and defense but can use an assortment of guns to dispatch enemies from a distance. Then there is a beetle and a spider who have a melee-based offense. The beetle is slow but heavily armored, and can damage a group of enemies in one blow. The spider is quick with powerful attacks, but isn’t as well protected. Each of these characters can be changed to on the fly, and it’s imperative to recognize which one to use in any given situation in the game.

There are a ton of different enemies in Bug Heroes, both large and small, who will react differently and must be dealt with accordingly. Some will come after your character directly, some will bypass you and go straight for your food pile, and some will sit stationary and use ranged weapons against you, forcing you to go to them. Enemies come in waves, with their strength and numbers increasing with each new one. Your heroes will earn experience as they defeat enemies which allows you to add attribute points to their various skills as they level up. 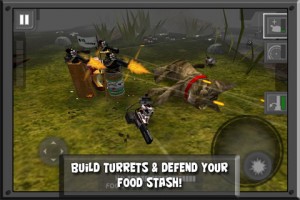 The combination of switching characters, dealing with the different enemies, upgrading and leveling up, and worrying about your stockpile of food ensures a constant stream of action as you play Bug Heroes. There is a lot going on in the game, but it flows really well and ends up being a lot of fun and not overwhelming. If this wasn’t enough, there are also timed quests that will pop up as you play, like collecting coins or killing certain enemy types, that can earn you additional money and experience. Besides the Adventure mode, there is also a more standard survival mode called Coliseum. This mode has you picking just one of the three characters and taking on endless waves of enemies. You still level up, gain money, and can upgrade your weapons, but it’s a more straightforward way to play Bug Heroes and feels different enough that it could almost be its own separate game.

Visually, the game looks fantastic, with dynamic lighting effects and a day/night cycle that changes the ambience as you play. The character designs in particular are really well done, and your heroes and the many different enemies all have a lot of personality. The nice graphics do bring up my only gripe with Bug Heroes though, which is that the game has a tendency to stutter at times when there is lots of action onscreen at once. The game is optimized for all devices, and you can choose to tone down the graphical effects in the options, but it still will occasionally hang even if you do.

There is just so much going on in Bug Heroes, it’s amazing that it all blends so incredibly well. What I like the most is that Foursaken has put a lot of different gameplay elements into the game, but there is a wide range of personalization in how you choose to use them, allowing you to play the game the way that suits you the best. Bug Heroes reminds me a lot of Cave’s Mushihimesama Bug Panic [$4.99/Lite] in that it adds a ton of skill and strategy to the dual-stick shooter formula, instead of the typical mindless killing, and it’s going to be really hard to ever find a way to enjoy a typical dual-stick shooter again. Bug Heroes is receiving a lot of positive impressions from players in our forums, and Foursaken is actively addressing feedback and suggestions. If you have any interest in the various genres present in Bug Heroes, or you just like a solid action game, then it’s definitely recommended to give Bug Heroes a look.