Back in late September Rocketcat Games announced their newest title Hook Worlds, the amalgamation of sorts of their previous iOS offerings Hook Champ [$2.99/Lite] and Super QuickHook [$2.99]. Hook Worlds is a collection of 3 different endless hooking games (well, 4 really, but more on that in a minute) that each utilize mechanics from the aforementioned titles, as well as some new ones.

Rocketcat has uploaded the entire Hook Worlds sountrack to their YouTube channel, along with some humorous hints to the storylines associated with each of the game worlds. Following is a brief rundown of each of the games in Hook Worlds, along with the YouTube descriptions and some new screens (click to enlarge): 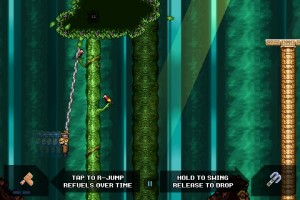 In World One, an ancient death god awakens and is all upset because Gramps stole his dainty little sacred idol. Gramps also calls it a “ninny". An old-fashioned grappling hook chase ensues.

After three solid minutes of being made a fool of by Gramps, the ancient death god decides to pull out all the stops. Gramps must swing and rocketjump through the cursed jungle, with death floating right behind him.

Hook Gunner – The second game is called Hook Gunner and stars Zelle, the vivacious DLC character from Hook Champ. Zelle will have the ability to fire a weapon through barriers as she collects coins and makes her way through a dungeon. 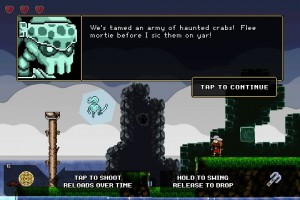 In world two, Zelle tries to collect the bounty on a gang of pirates. They all turn out to be ghosts and floating skulls. She shoots them anyway, along with their army of gigantic haunted crabs.

Cybergnome 202X – Finally, the fan-favorite Gnomey from Super QuickHook gets his own game world called Cybergnome 202X, which features the most radically different game mechanic of them all. Gnomey will actually have the ability to flip gravity, and will have to make use of both floor and ceiling as he escapes from the Gnome Police. 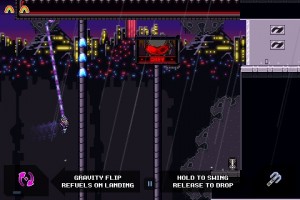 In World Three, Gnomey must escape the grim dystopian future. It’s not clear exactly what his plan is, but he has a gravity flip belt and a grappling hook. The power-mad Gnome Police stand between him and his goals of gnoming it up, gnome-style.

Eventually, Gnomey is enveloped by and infused with the incredible power of Rainbow Magic. This music plays, and in the very end he might magically turn into a tree for absolutely no reason at all.

Retro Hook Champ – As a special bonus, players who download Hook Worlds through the first weekend of its release will get a bonus 4th game that is an early 80s take on Hook Champ, complete with retro stylings. If you don’t happen to get this early buyer bonus, this world will become available for all players in a future update roughly a month following release. 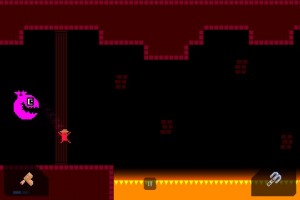 In the fourth world, you get to play the very first version of Hook Champ. The one made in 1982. Help Jake survive the Chaser’s wrath until you’re obliterated by spikes!

Rocketcat was also kind enough to put together a trailer of Hook Worlds for us that showcases some gameplay from the Cybergnome 202X level, complete with gravity flipping and Rainbow Magic.

Needless to say, as a big fan of both Hook Champ and Super QuickHook, I’m really excited to check out Hook Worlds. In addition to gaining early access to the bonus 4th world, as an early buyer you will also get the exclusive Rocketcat Mask and Hat as well as the RocketHook. If Hook Worlds is anything like their previous games, you can expect a slew of new hats and outfits, and possibly even entire new game worlds, to be added in updates. Hook Worlds was submitted on December 1st, and as long as Apple approves it in time, it will launch on December 16th for 99¢.

Make sure to check out the original gameplay trailer that we posted in October that shows gameplay of the first 3 game worlds, and drop by the discussion thread in our forums. We’ll be taking another look at Hook Worlds when it gets released (hopefully) next week.