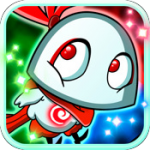 Last week, we took a hands-on look at Wispin [99¢], the debut game from indie developer Grumpyface Studios. Wispin is an arena survival shooter without the shooting, instead relying on a unique color matching mechanic as the core of its gameplay. I really enjoyed my time with the preview version of Wispin, and it has since become available for purchase in the App Store. If you typically like the kind of action you would find in the multitude of iOS dual-stick shooters, but are tired of how similar they’ve all become, then Wispin is worth a look as it offers a new take on the formula and does it with the kind of style and polish that would rival long-time development studios.

In Wispin, you move your character with a left stick as per usual, but the right “stick” is actually a color wheel that changes your character to one of three colors. Enemies called Bloopers pop up from the ground all around you, and you’ll use the right stick to change to the same color as the enemies you want to attack. As more and more enemies appear, Wispin turns into a frenzied battle as you are constantly trying to change your color on the fly while running down every last one of them. Bombs and arrows can be picked up randomly to mix up the offense as well as some special items like a wedge of cheese that draws all like-colored enemies towards where you toss it. 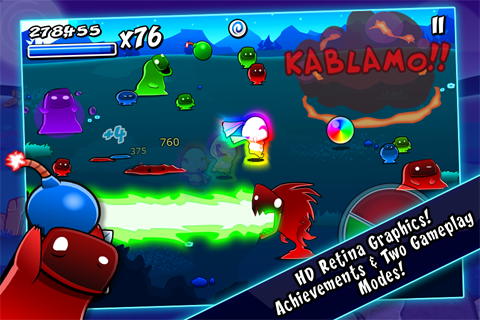 Just changing colors and mashing into enemies is pretty fun, but a nice multiplier system adds a layer of strategy to the combat in Wispin. Each Blooper you splat in quick succession adds to a multiplier that increases the points earned for defeating enemies. Getting 3 kills in a row of the same colored blooper will give your character a temporary speed boost, and getting to a 20x multiplier sends him into a crazed frenzy around the screen killing Bloopers of every color in his path. The multiplier aspect is what really makes Wispin fun to play. Taking your time and carefully defeating Bloopers is what will help you last a long time, but since this is a high score game the temptation to try to kill enemies quickly and build up a huge multiplier can lead to some reckless decision making.

There are two different modes to play in Wispin. The first is Standard Mode that brings wave after wave of increasingly harder Bloopers, and the other is called Super Intense Mode that is one endless wave with a constant onslaught of enemies. The Standard Mode starts out pretty slow, and the action doesn’t really start to pick up until about the 5th wave. Lasting past 10 waves unlocks Super Intense Mode which is much more action-packed right off the bat. Wispin is a really challenging game, and just getting to wave 10 to unlock the new mode is a tough feat. Adding to the challenge is the slightly awkward handling of character movement. It’s hard to be precise in where you move, and I’ve had more than one death because I accidentally bumped into a Blooper when I didn’t mean to. Also, the smaller Bloopers can be hard to pinpoint and kill, leading to more unintentional damage. It’s not a game breaker, and Grumpyface has already issued an update to Apple that tightens up the control stick, but it can lead to some frustrating moments.

Overall though, Wispin is a breath of fresh air in iOS gaming. The crisp Retina Display graphics and charming art style are very visually pleasing. The unique color matching system adds a twist to a genre of gameplay that has been done to death on the App Store before. There are two different environments to play on currently, but Grumpyface has plans to add more with future updates and is actively seeking new ideas in our forums for things to add to the game. Game Center integration handles online high score tracking and achievements, and there is even a color blind mode to help the color blinded players amongst us to differentiate the default colors. If you’re looking for some arcade-style action that’s deviates from the norm, I would definitely recommend checking out Wispin.