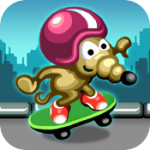 The fine folks over at Donut Games have just released their latest iOS game titled Rat On A Skateboard [99¢] into the App Store. This latest offering features all the hallmarks of a Donut Games release – colorful pixel art, simple game mechanics, and high replay value. I love just about all of Donut’s 20+ iOS games, and Rat On A Skateboard is no exception. It stars Ratty, the main character from Rat On The Run [99¢] and Rat On A Scooter XL [99¢], as he travels treacherous terrain on his skateboard busting tricks and avoiding obstacles. There are three different game modes to play in Rat On A Skateboard – two endless modes and one 30 level challenge mode with a three star achievement system, and all modes feature online high score tracking.

The basic gameplay has Ratty moving automatically from left to right across the screen on his skateboard. Tapping the screen makes him jump (or ollie, to be precise) and tapping the screen while he is in the air performs tricks. You can perform up to four tricks in the air based on how many taps you can pull off before Ratty hits the ground. These tricks in order are a kickflip, a 360 flip, a triple kickflip, and a master flip, and you’ll earn more points by executing multiple tricks in one jump. This adds a slightly more strategic element to the game where you can effectively earn more points by performing a lot of in-air tricks during well planned jumps, rather than only having your score increase solely due to collecting items or traveling a long distance. 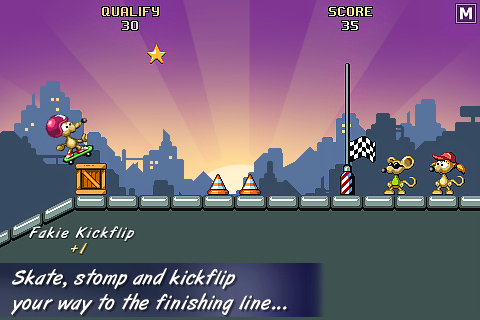 The first two modes in Rat On A Skateboard are Canabalt-style randomly generated endless levels. The first, Power Stunts, has you busting tricks, grinding rails, and collecting stars and cheese for points all while avoiding a host of bouncing basketballs that litter your path. The basketballs will knock you off your board if you crash into them thus ending your run, but you can also bounce off the top of them to score some extra points. The second endless mode, Banana Harbor, is similar to the first but features a shower of banana peels raining down from the sky. Each banana peel you pass earns you a point for your score, and Banana Harbor is quite a bit more difficult than the first mode. Finally there is a Challenge mode with 30 set levels filled with various obstacles and challenges, and each of these levels features the wonderful Donut Games three star achievement system.

The one minor gripe that I have with Rat On A Skateboard, and with all Donut games actually, is that accessing the online high scores pulls you out of the game and opens up the leaderboards in Safari. In an age where Game Center is readily available to developers, this sort of action doesn’t quite fly anymore, and I’d love to see their entire catalog updated with proper in-game leaderboards in the future. This isn’t enough to put me off from playing the game though, as beating my own local high score and earning 3 stars on all the levels is usually my focus anyway. I may be bordering on sounding like a broken record, but Donut Games has done it again, and if you have a spare dollar sitting around then Rat On A Skateboard is an excellent way to spend it.