I don’t have a Parrot AR.Drone like Eli “Hollywood" Hodapp does, but I wish I did. He seemed to connect with the device on a deep, fundamental level and love bloomed as the two grew closer together during their private review sessions. But with all man-toys, that fondness and that spark can fade as familiarity sets in. Ah, if only there was a two-player game that supported the Parrot AR. Drone. That would make Eli and the masses love again…

Oh, hey, how convenient; there will be such a thing! Parrot is telling us that a new AR game is on the way, and it’s one that seeks to test players’ flying mettle both in and outside of an App. Crazy! 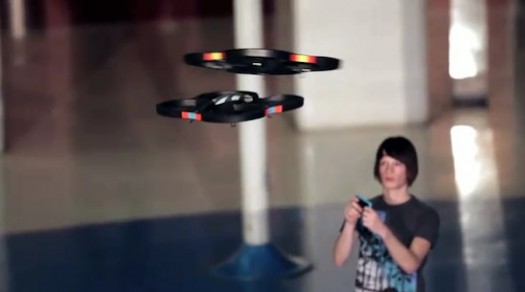 AR. Pursuit as this title is called, is a “two-player pursuit game" that will have a duo of AR.Drone-equipped people shooting it out in a digital space while flying their Drones in the real, McDonald’s-infested world we live in.

Here’s how it works: the game uses the Drone’s front-facing cameras and renders in bullets and missiles when players choose to fire. To avoid game-death, players will need to maneuver their drones in various directions, making the real world a game board as opposed to a grim place of death and fast food.

The game, which hits November 26 at $2.99, can be played indoors and out provided a stable Wi-Fi connection can be accessed. Parrot recommends that you use those indoor stickers if you plan to play indoors, and obviously you’ll want to pick a place that’s large enough to move an RC craft around in.

The future! Let’s get with the Bacta tanks already, please. My knee hurts and I don’t want to go to a doctor. Thanks.