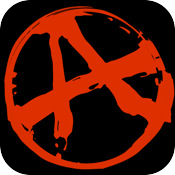 I’m not really sure where to start with this review since we’ve posted so much about RAGE [99¢ / HD] in the past, but for the sake of not leaving people who stumble across this review on Twitter or Google out in the cold, here’s some back story.

Back at QuakeCon in August, John Carmack pulled his iPhone out of his pocket and surprised the audience with a incredibly impressive tech demo of a portion of the upcoming RAGE first person shooter complete with the new id Tech 5 graphics engine. iOS gamers were left with their jaws on the floor as the potential of a pocket sized-version of RAGE ran wild in everyone’s imagination.

The full version of RAGE for the PC and home consoles isn’t going to be released until late next year, but the iOS version is only a small peek into the RAGE universe. It comes in two flavors, a “high definition" version for the iPhone 4, 4th generation iPod touch and iPad. A “standard definition" version is available for other devices. The basis of the iPhone game is that you are a contestant on a weekly game show where people are pitted against an onslaught of mutants to win fabulous prizes. 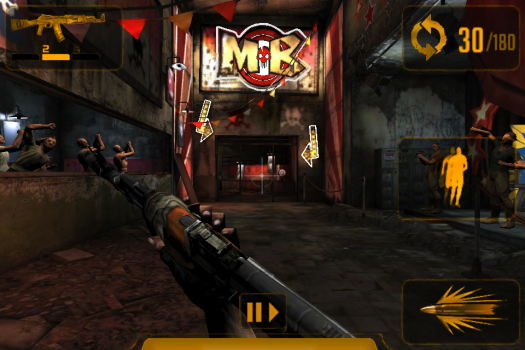 RAGE for iOS begins with a selection of three levels (or, “seasons" of the Mutant Bash TV show) along with difficulty levels ranging from “easy" to “nightmare". The goal is to make your way through each of these levels and earning as much in-game cash as possible. RAGE for the iPhone is entirely on rails, and it plays a lot like other arcade-style rails shooters like Time Crisis. The game runs you through each level and you control your field of view, aiming at things with a crosshair in the center of the screen.

Two control options are included, a tilt-based option which controls like many other games where you tilt to control your view as well as a virtual joystick of sorts which also isn’t anything new. Sensitivity options are included for both input methods, as well as the ability to flip both the X and Y axis. Oddly enough, no gyroscope control option has been included in the initial release. We found the default controls to be workable, but twitchy. It seems that the main cause of this is that the game always wants to be centering your view. When you let your finger of the screen, instead of staying where you’re looking, it snaps right back to the center. Also, playing through the levels can be a little disorienting at times as you’re expecting to be able to control where you look, but often times, the game disregards your input and will, for instance, quickly look to the right to peer around a corner. 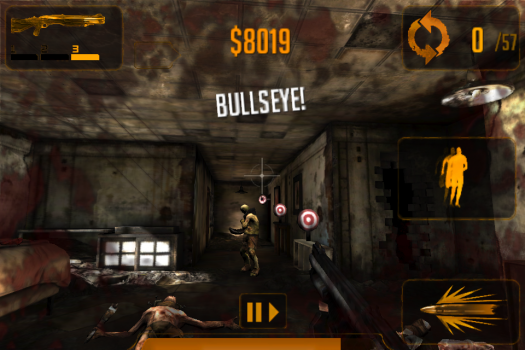 There’s more to do in RAGE than blast mutants though, as earning tons of cash involves picking up tons of loot and hitting various bulls eyes as well. All this goes together to create an incredibly fast paced experience as you run down hallways, and making split second decisions between continuing to shoot at a mutant or aim off to the right to score some quick bonus points. On easy mode, it basically doesn’t matter what you do, but on nightmare, a decision like that could mean life or death.

Once you complete a level, your score is displayed, the next one is unlocked, and you keep playing. Assuming you are playing on a difficulty level low enough to not get mauled by mutants requiring extra play throughs, making your way through all three seasons of Mutant Bash TV will likely take around 30 minutes. From there, it’s up to you to find your own motivation to continue playing the game. Game Center isn’t implemented yet, so you’ve really got to be one of those people who really likes beating their own score to keep playing the game. Enemies always spawn in the same place, and both the bonus targets and loot never move. Once you memorize the game, it just comes down to how efficiently you can make your way through the levels.

There’s lots of room for improvement in RAGE, in fact, John Carmack himself started a thread in our forums asking for suggestions. Online scores, and some kind of in-game store to spend the money you earn on things like different weapons, skins, or anything else to work towards would add tons of replay value which is the one thing that RAGE really is lacking right now.

Like most games, how much you enjoy RAGE likely depends on your expectations going in to it. At the end of the day, RAGE is little more than a fabulous looking bite sized sample of a much more expansive RAGE universe which will be further explored in future games. For what it is, RAGE is a fun game that I’ve had a great time playing through a few times. It’s also one of the best ways to both show off the power of your iPhone as unlike Epic Citadel [Free], RAGE is an actual game.