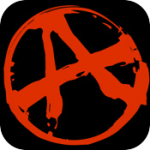 As of a few minutes ago we’re able to cross another game off of our most anticipated list. Id’s RAGE [99¢ / $1.99] is an on-rails shooter where players compete on an in-game game show called Mutant Bash TV. We explained the basic gameplay in our preview:

Mutant Bash TV plays surprisingly similar to DOOM Resurrection [$6.99]. The entire game takes place on rails, and even the controls are laid out similarly. Tilting controls the camera and your aim, and you have buttons to dodge, fire, switch weapons, and reload. The main difference is just how much faster everything is in Mutant Bash TV. Mutants pop up everywhere, and while you’re dealing with them there are bags of cash to grab and bullseyes to shoot. Your overall performance is graded at the end of the level, at which point you can either move on to a new level or replay the last one for an even higher score. Four difficulty settings are included, ranging from easy (where it’s seemingly impossible to die) to nightmare (which is incredibly difficult).

Something worth emphasizing is that while it is a rails shooter like DOOM Resurrection, instead of only moving a crosshair around you can move the entire field of view, giving a much greater feeling of immersion. RAGE comes in two flavors, a “standard definition" version and a “high definition" version. RAGE HD has higher quality graphical assets, and a much larger file size. Both are universal and will work on the iPad. 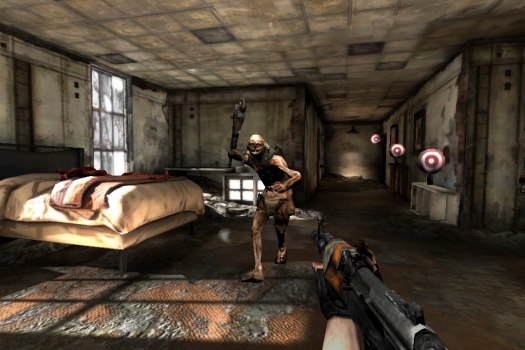 So which one do you get? Well, if you have an iPhone 4, a 4th generation iPod touch, or an iPad, you really need to get RAGE HD. If you’ve got a 3rd generation iPod touch or an iPhone 3GS, it’s a toss up. RAGE HD will run, but the standard RAGE will play smoother. If you plan on upgrading to a newer device soon, consider RAGE HD. If you own an older device, only RAGE will run, so you don’t have much of a choice.


We’re still working on our review, but for the time being, if you want to see one of the best looking games available on the App Store, this is a buck (or two) that you need to spend.

First impressions from readers are filtering into the forums with id’s John Carmack participating and answering some questions.