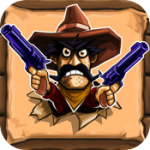 Guns’n’Glory was released in late August and our review reflected just how surprised we were with just how fun the game turned out to be. Unlike many tower defense games where you place a tower and it stays there until you sell it, Guns’n’Glory almost plays closer to an RTS than a TD because you’re able to move all of your units around whenever you please. This allows you to adapt your entire defense to each incoming wave of, well, innocent settlers attempting to make their way west.

Another thing that is amusing about Guns’n’Glory is that you don’t control a faceless set of towers that attack an array of geometric shapes, monsters, or aliens. No, instead you control a team of bandits that quite literally position themselves on bridges and over mountain passes, slaughtering entire families of people trying to settle out west. It’s a silly and entirely unexpected premise for a tower defense game, and I’m more than a little surprised that it didn’t seem to offend anyone.

Take a look at the trailer, and take a peek at our review if you’d like, but really you should just download this game as quickly as possible while it’s still free. The mix of tower defense and realtime strategy elements really makes for a fun game. It’s a little short on content, but that’s hard to get worked up over while the game is free.