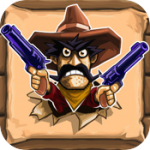 Tower defense games on the App Store come in all shapes, sizes, and flavors it seems as the genre becomes more and more saturated with each new release. Much like match threes, it’s getting harder and harder for these games to stick out amongst the crowd when there are already such fantastic tower defense staples such as Fieldrunners [$2.99 / HD], geoDefense [$1.99 / Free] (along with geoDefense Swarm [$1.99]), or my personal favorites, Sentinel: Mars Defense [99¢] and Sentinel 2: Earth Defense [$1.99]. But just because all these awesome games exist, doesn’t mean I don’t try every tower defense game that looks interesting (and every match three for that matter) but so often in these games there’s not much in them that given the choice would make me tap their icon instead of just playing some Fieldrunners or any of the other games I just mentioned.

Guns’n’Glory [$2.99] is a somewhat rare exception to that, and I really can’t believe it hasn’t generated more buzz in the time since its release over a week ago because it’s one of the most unique tower defense games I’ve played in quite a while. Handy Games did a great job of combining some elements of realtime strategy with the standard tower defense formula as well as a ridiculous premise, great sprite-based graphics, and a western themed soundtrack that fits the game perfectly. On top of that, it’s even universal and while I prefer it on the iPad, it’s just as much fun on the iPhone. 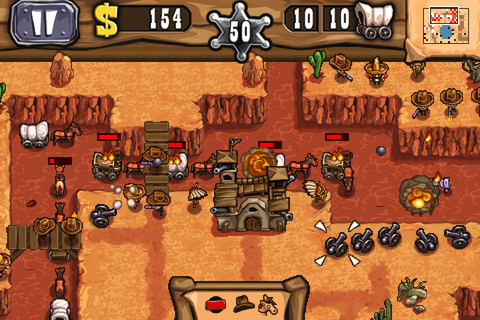 So by now it all sounds good and you’re probably wondering what’s the deal with the title of this review. Well, I’m not entirely sure how the setting of the game will sit with some people as in Guns’n’Glory you’re not protecting Earth from invading aliens, or killing the anonymous troops of some enemy army. Instead, you control a gang of bandits made up of various stereotypes, train-mounted gatling guns, and cannons. These bandits slaughter waves after waves of men, women, horses, and a few different types of covered wagons all trying to make their way west. It’s actually kind of amusing how when playing the game I went from “Wait a minute, these are… obviously women… that I’m gunning down" to “Argh, get back here you!" as a settler makes it to the end of the path and off the screen.

Five units are included in the game: “Desperados" which are your standard run of the mill pistol totin’ bandits, “Mexicans" who toss sticks of dynamite, “Indians" who shoot flaming arrows, cannons which are strong against wagons, and the gatling gun. These units are all on screen at the start of every level, taking a nap in the hot desert sun. To enlist their help, they have to be paid off with the gold coins you earn from slaying settlers, at which point you can tap one, and wake them up to start shooting. The cool part about how all these units work is that you can move them around at any time during the battle, and this mechanic really starts to become important later in the game where there are multiple paths and not enough manpower to cover all of them.

Tapping an awake bandit selects them, then you can tap anywhere and have them walk there if there is a clear path to get to the destination. This actually works out to be really cool, because you can totally change your defensive strategy on the fly and it’s awesome to just be able to upgrade a small handful of units then just micromanage them well to complete levels with minimal defenses. There isn’t a fast forward button in Guns’n’Glory to speed up the gameplay, which normally would be a negative in any tower defense game, but I never felt the need to speed time up at all in this one as you’re almost always busy repositioning your units for maximum effectiveness.

Further in to the game you will get access to trains to mount your gating guns on which can move quickly but obviously are limited to train tracks. Also, chests will spawn in the game world and depending on the icon over the chest sending a unit over to collect it will make their attacks stronger, faster, or just award you some gold. In later levels, juggling all of the mayhem between moving your units, going for chests, deciding what to upgrade, and which units to wake up is a ton of fun.

The main down side to all of this is when you begin to realize how few levels there are in the game. There are ten levels included, and really not much reason to replay them once you beat them. This wouldn’t be so bad, if half the levels weren’t building up as a tutorial, as you don’t even gain the ability to upgrade your units until the fifth level– Half way through the game. Regardless, Guns’n’Glory is a very fun ride while it lasts. 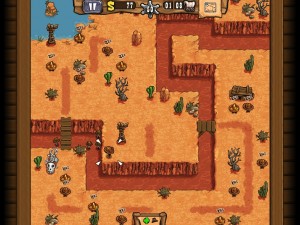 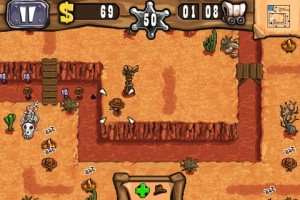 Curiously enough, Guns’n’Glory is listed in iTunes proudly and prominently as “AD FREE", and according to the developers on our forums there is a free version in the works, though still waiting for approval by Apple. Whether you keep the free version on your App Store watch list or you grab the paid version, Guns’n’Glory is a game that any fan of tower defense games will enjoy.