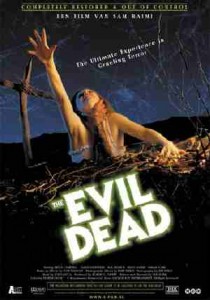 Just in time for Halloween comes word of an official Evil Dead game coming to the App Store. For those that don’t know, Evil Dead is a campy 80s horror movie directed by Sam Raimi (yes, the director of the Spider-Man movies) that follows a group of college kids as they spend the weekend in a remote cabin in the Tennessee woods. They accidentally unleash demons into the world by using The Book of the Dead, and all manner of Hell breaks loose. Main character Ash (the “King of All B-Movies" Bruce Campbell) spends all night fending off his friends as they each become infected with evil spirits. Evil Dead has become a cult classic horror film in the nearly 30 years since it was released.

We literally have no details about the upcoming game, but are impressed with how faithfully the game represents the original film in this trailer:

We’re eager to find out any more information about this Evil Dead game that is coming to our iOS devices, but so far the developers are remaining hush about any specifics. What’s interesting is that the trailer seems to use the actual audio directly from the movie itself, and what is shown closely mimics the events in the movie as well (though with Nintendo Mii-like characters). Also, this comes after the announcement of an Army of Darkness (the third movie in the Evil Dead trilogy) iOS game coming next year, but it doesn’t appear that the two games are related aside from subject matter. We’ll bring you any more news on this game as we get it, and until then I’ll just pop in my Evil Dead Necronomicon Edition DVD and patiently wait.