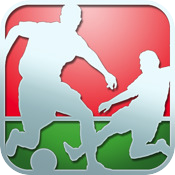 One of the lowpoints of the Fifa World Cup this year was all the blatant minimal-contact theatrical performances players attempted– usually with one eye on the referee too, to gauge his reaction. Distinctive Developments has taken it upon themselves to reinject some testosterone into the world game, through its newest iOS creation, Bonecruncher Soccer [99¢], an obvious take on Backbreaker Football: Tackle Alley for the round ball game.

Much like Backbreaker, in Bonecruncher Soccer, your ultimate goal is to run the field of opponents with the ball at your feet; evading them with your athletic ability and speed. What Bonecruncher brings to the table (besides only a mildly creative title) is what happens when you do reach the goals at the other end. Borrowing from the basics of other casual soccer titles, your player lines up his kick and waits for a flick of your finger to direct his shot. 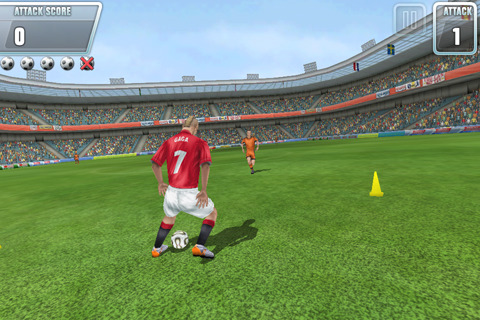 The running mechanic in Bonecruncher is very heavily borrowed from Backbreaker and this isn’t necessarily a bad thing. They’ve clearly learned what makes these types of games fun; with a series of challenges divided into different difficulty classes offering solid gameplay progression. Each level you face off against a growing number of violent defenders with you squarely in their sights and not a moment’s consideration of where the ball is. There’s certainly no call for diving here, as defenders are more than willing to provide all the incentive you need to end with your face eating dirt and minus a working limb or two. 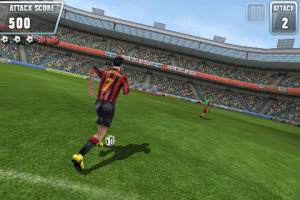 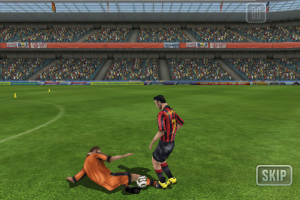 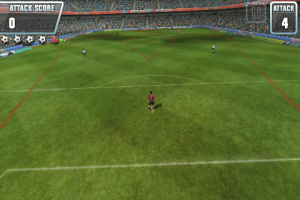 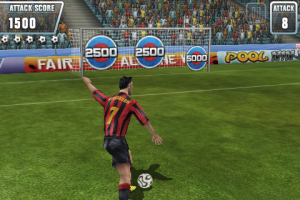 You get around these juggernauts with both your dribbling ability and speed. A side-step maneuver and the more elaborate Roulette spin is performed in either direction by swiping vertically or horizontally on the edges of your screen. Holding down anywhere else on your screen causes your player to run, and tilting your device affects the direction of your sprint. The dribbling is straightforward and fun, though we wish it showcased more of the impressive skills of the Peles and Ronaldhinos of the game than just these two. 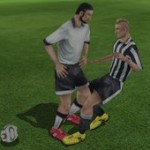 Though that would likely result in less of the spectacular tackles that lends the game its name. You wouldn’t think that soccer could compare with some of the more bone-jarring spear-tackles of Backbreaker but Bonecruncher pulls it off. Slide tackles fly in from behind or beside you and care not whether they hit man or ball first (or whether studs are flashing). So long as they knock you on your rear, defenders will hit you full force with very audible, dare we say it, bone crunching force. The fact that it’s replayed to you (though without the replay controls of backbreaker) makes it all the more gruesome.

To extend and vary the gameplay further, Bonecruncher implements several gameplay features in the latter levels that are again reminescent of Backbreaker. Gates to aim for and barriers to avoid all offer their own challenges once the basic evasion moves are mastered. In fact, the game becomes so saturated with players and obstacles in the later two Pro and World Class levels, that the 5 lives you’re given to complete each level will soon seem less than fair. Make no mistake, Bonecruncher is no pushoever, and it’ll take quite a while (and many a knee-reconstrction) to work through all 40 levels and Game Center achievements. Furthermore, once that’s done there’s a timed shootout mode available which lets you play just the goal-scoring element.

Bonecruncher Soccer is a lot of fun that should prove a winner for fans of the only remaining football game that keeps the ball at your feet. It looks and sounds terrific and thankfully supports the Retina display right out of the box. Though it borrows unashamedly from Backbreaker, it has added its own touches with the addition of the shooting mechanic and a host of customizable players and kits. We still think the gameplay could have done with more flip-flaps, step-overs and drag-backs, but maybe it’s something to look forward to in future updates. That said, Bonecruncher is an effortless recommendation to both Flick Football fans and Backbreaker fans who don’t mind a bit of soccer on the side, too.