While Gameloft and EA are busy battling each other with their own respective full football games, NaturalMotion is taking a different approach in tackling the sport. Backbreaker Football: Tackle Alley is part tech demo and part physics-based mini game that takes a fairly basic game concept and turns it in to something really fun.

The gameplay of Backbreaker is structured in to a series of challenges where you run down a football field juking, spinning, and sprinting past defenders attempting to tackle you. You run by tilting your device forward, and the direction you run is controlled by tilting left or right similar to how you would control a racing game.

The different levels start simple, initially only asking you to evade a few defenders on a wide open field. Backbreaker quickly adds a twist with the inclusion of red lines on the field that you must run between without getting tackled. Step across one of these lines and you have to start the whole level over. 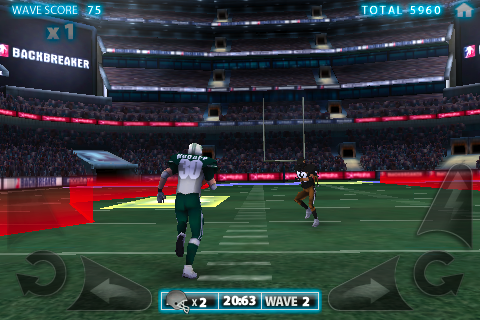 The red boundaries are eventually joined by zones on the field that award extra points when you run across them and during the last half of the game you will be darting all over the field both to stay in bounds and to rack up extra points.

The best (and by far my favorite) way to rack up points is by showboating. After you evade the last defender in a level, the showboat button will light up on screen. Holding this button down makes your player start one of a few included showboating animations such as spreading your arms out or high stepping. It’s not that simple though, as the defending players will still chase after you after they get back up from their failed tackle. 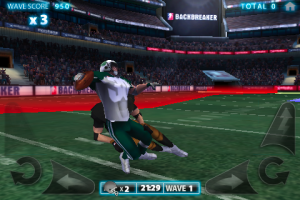 This creates a hilarious balancing act between showboating for maximum points, but still making it to the end zone without being tackled. Since you don’t have a very good view behind you, it’s not uncommon to need to switch from showboating to sprinting, only to barely score a touchdown without being taken down.

Since there are only a few players to be rendered on screen at once, Backbreaker has much better player models than Gameloft’s and EA’s football offerings. Also, with the addition of the impressive morpheme physics engine, no two tackles are ever the same. After each tackle you’re offered an instant replay, and I oddly found myself watching them quite often. Like most games that rely on ragdoll physics, there can be some funny (and highly unrealistic) anomalies, but by and large the tackle animations really are fun to watch.

Backbreaker is an unlicensed football game, so there are no NFL teams or players to be found anywhere within the game. Instead, there are a few generic teams bundled in for you to choose from. Your player can also be customized with skin color, number, and even your name which actually appears in game on the back of your jersey.

Five different sets of challenges are included, with 10 waves of defenders in each challenge. Bronze, silver, or gold helmets are awarded depending on your score, and you can revisit challenges as many times as you’d like to get gold helmets in everything. Once you complete the challenge mode, you can take a crack at endurance mode where you have to run through all 50 waves of defenders for one score total. There is allegedly some secret content that is unlocked when you beat the endurance mode, but I’ve been unable to successfully do that yet. 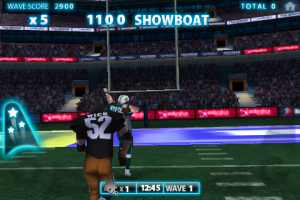 So I suppose the inevitable question here is whether or not Backbreaker is worth owning if you already have Madden 10 or NFL 2010. I think there is room for both (or all three) on your iPhone if you’re a football fan. While EA and Gameloft’s offerings provide a more complete football experience, Backbreaker is a fun mini game with cool graphics and animations that seems more accessible for playing in short bursts due to the simplicity of the game.

The best way I’ve come up with to describe Backbreaker is that it’s the Doodle Jump of football. There isn’t anything overly technical about the gameplay, but it has a strangely compelling aspect to it, especially as you’re high stepping to the end zone.

Backbreaker Football: Tackle Alley has been submitted to the App Store and should be available soon.