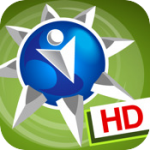 The current trend in iPad game releases seems to be for developers to take an existing iPhone game, append “HD" to the end of the name, and increase both the resolution of the graphics and the price– and maybe add an iPad-exclusive feature of two. iPhone developer One Man Left have significantly upped the HD ante this week, releasing one of the best HD remakes I’ve played in quite a while of an existing iPhone game. We loved the original in our review where we explained the basic premise behind the game:

Tilt to Live [$2.99] is at its core, an object-avoidance game wholly utilising the accelerometer of the iPhone or iTouch to maneuver your arrow around the battlefield. I say battlefield, because that’s exactly what is going on here– the dots are out to get you and will stop at nothing. And it is remarkable just how much personality One Man Left have managed to inject into such a straightforward concept. These are certainly no ordinary dots– these perilous periods make a point (ha!) of chasing you around the screen; coalescing into arrows and other shapes then hurling themselves at you at breakneck pace, or circling you like vultures, slowly closing in until it is impossible to escape. Make no mistake, touch even one of the hundreds of dots on screen at once, and you are history.

Tilt to Live HD [Free] offers identical gameplay, with a major twist: Instead of simply making everything bigger, they kept all the in-game objects the same size, and quadrupled the size of the battlefield. In our early previews, I wasn’t really sure how much of a difference this would make when you’re actually playing the game, but after spending a considerable amount of time with it (in fact, this review itself was delayed because I simply couldn’t put it down), I’m totally sold on this HD remake. 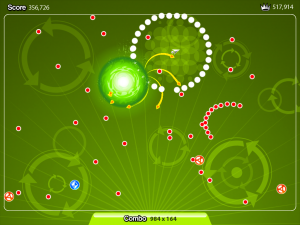 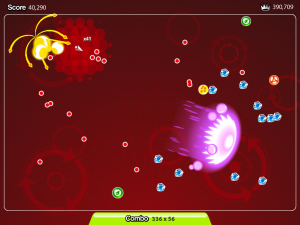 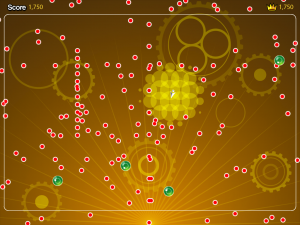 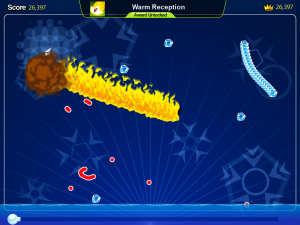 Increasing the size of the battlefield makes playing the game much more exciting because of just how many more red dots appear on screen, and how much farther power-ups spawn away from you. Not to say the original Tilt to Live was boring by any means, but this is one instance where much more going on at once on screen is actually much, much better.

To further kick things up a notch, Tilt to Live HD is available for free. With your free download you get full access to a limited classic mode with only a few of the available weapons. If you’re happy with this, you can play to your heart’s content, competing in a free mode online leaderboard until you’re blue in the face. For a $3.99 in-app purchase you then unlock the rest of the game. This opens up additional power-ups to earn, and three additional game modes: Code Red which is just classic mode but much faster and more difficult, Gauntlet Evolved which is pure avoidance, and Frostbite which has you shattering red dots before they thaw at the bottom of the screen. Each game mode plays differently, and has its own associated online leaderboard.

Originally I was thinking that Tilt to Live HD wouldn’t be that fun to play because I haven’t really found myself liking tilt controls much on the iPad due to the weight of the device. Oddly enough, this doesn’t seem to be an issue at all, and hasn’t stopped me from sitting perched on the edge of my couch completely focused on my iPad as a bob my head to the music for hours on end.

If you own an iPad, you owe it to yourself to at least try out the free mode of Tilt to Live HD.