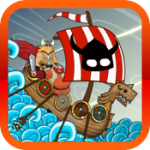 There are few things I like more than a good Viking game, especially one that is centered around a unique idea and colors it up with plenty of Viking humor. Two of my favorites that come to mind are Axe in Face [99¢] and The Horrible Vikings [$2.99], and now I can safely add I-play‘s Vikings Row! [99¢] to that list as well. In Vikings Row! you’ll control a viking ship by rowing through twisting and turning levels, all the while collecting loot and avoiding hazards in an effort to get to the finish line before time expires. It uses a really clever control mechanic, has a wonderful art style, and a ton of content to play through including earning medals for each level and unlocking achievements. Every once in a while a game comes along that just feels right on this platform, and Vikings Row! is one of those games.

Controlling your ship in Vikings Row! is akin to controlling a tank. You’ll swipe upwards on both sides of the screen in unison to move forward, and swipe downwards to slow down or move backwards. Swiping either the left or right side turns the ship, and swiping up on one side and down on the other causes you to turn more drastically. If you’ve played Vector Tanks Classic [99¢] or Extreme [$1.99], then you’ll recognize the controls in Vikings Row! as being really similar, though from a top-down perspective rather than a first-person one. It just feels natural, like each swipe of your thumb is acting as one side of the ship’s oars. A very nice tutorial level eases you into things, and with a little practice you’ll be pulling off all kinds of maneuvers in your Viking ship. 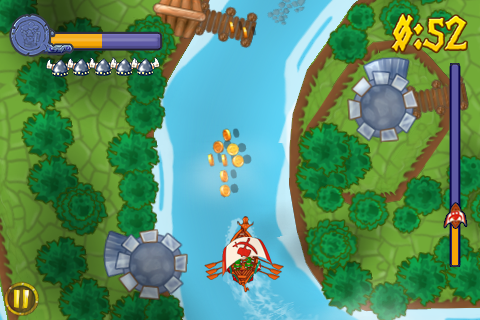 The levels in Vikings Row! are twisting waterways laden with hazards and coins. The goal is to complete the level before time runs out while collecting a target number of coins and avoiding sharp rocks and wooden spikes in the water. Each time you hit one of these hazards you’ll lose one of your Viking comrades, and if you lose all five then you fail that level. Each of the 48 levels are cleverly designed with hidden nooks and crannies that will reward the curious with extra coins. A minimum number of coins must be collected to earn a bronze shield and pass the level, with silver and gold shields attainable if you can collect enough loot.

Cruising around in my ship and beating the levels in Vikings Row! is a ton of fun, but there are a couple issues that bugged me. For one, the game can be really difficult. Just beating some levels with the minimum coins required is a challenge, and going back for silver or gold can be downright brutal. It’s a satisfying feeling obtaining gold for a level, but it can come with some frustration. Another thing is when starting a level the camera quickly pans over the whole area, but when you’re actually playing it can be difficult to tell where you’re going. With so many branching paths that lead to dead ends an overhead minimap would be useful, though this is also part of the game’s challenge. Also, while you must beat a level within a certain time limit, it doesn’t keep track of how fast you do so. Online leaderboards would add even more replayability to each level and allow you to compete with friends for best times.

Even with these minor complaints, there is a lot to like about Vikings Row! The cartoony graphics look great and are Retina Display-ready, and in-game cutscenes and dialogue are really humorous. Just controlling the ship through the waterways is a lot of fun, and attaining medals on each level is a real test of your skills. The game does get pretty hard, but in an inviting sort of way that begs you to keep retrying until you finally have that one flawless run. If you have a penchant for pillaging, swilling brew, beards, collecting loot, and cruising around in your mighty Viking ship, then take a look at Vikings Row!