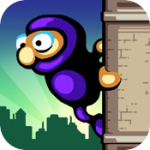 It wouldn’t surprise me if I went back and ran the numbers that Donut Games is responsible for more favorable game reviews than any other developer, or, at least, somewhere near the top of that list. Each Donut Game always seems to include so many things that make for great iPhone games such as online scoring, a tiered scoring/star system to enhance replay value, and gameplay mechanics that somehow go from incredibly simple to insanely difficult as the games progress.

Urban Ninja [99¢] has all of these features and more. In the game, you play as a fat French ninja looking to escape whatever obstacles are in between you and the rope dangling from the bottom of your escape helicopter. These often include a number of different types of bad guys, platforms, ropes, buildings, and other things. An energy meter on the top left corner of the screen serves as both your health meter, and an energy meter. 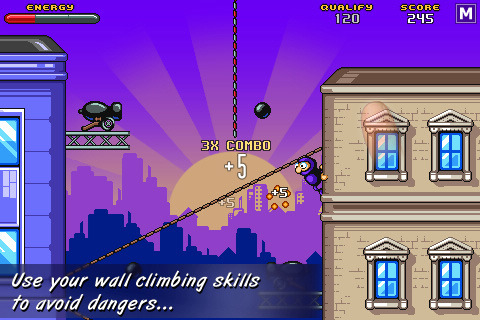 Getting from the start of the level to your escape helicopter involves careful jumping, as each jump depletes your energy and you die once you run out. To refill your energy (and increase your score), stars are scattered throughout each level that can be picked up. Also, a score bonus is awarded by ending the level as far down the helicopter’s rope as possible, something that is usually easier said than done.

Like other Donut Games, Urban Ninja features a three star grading system for each level. Clearing the 40 included levels with a single star should be easy enough for most people, and scoring two stars is usually much more difficult. Scoring three stars, it seems, is a matter of completing a level absolutely perfectly. If you’re the kind of person who can get sucked in to earning stars like this, Urban Ninja will have a ridiculous amount of replay value.

If you’re looking for another quick pick up and play game to spend some time with, Urban Ninja is a great choice. If you like it, give some of the other Donut Games a look. Some favorites of mine include Cat Physics, Comet Racer, and Action Buggy.