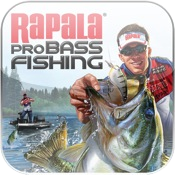 Fishing games are a niche genre, little heard of before the popularity of the iOS touch and tilt interface. Games like Flick Fishing and Fishing Kings have introduced many newcomers to the sport in a more arcade-like way that has proven quite successful. So much so in fact that mega-publisher Activision have ported their take on angling to iOS, in Rapala Pro Bass Fishing [App Store], a universal app for the iPad and its smaller siblings.

Rapala Pro Bass Fishing starts off with a gutsy speedboat cutscene, in typical Activision flair. The intro movie kicks off what becomes a trend in your fishing career, as each victory is met with an over-the-top cutscene looking more like an MTV award night. Fortunately, everything in Rapala Pro Bass Fishing looks as great as these movies do, particularly the in-game environments which are fully fleshed out landscapes across many fishing hotspots. 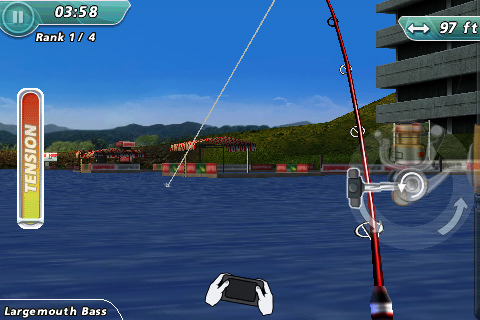 In this respect, Rapala Pro Bass Fishing has addressed the crticisms of similar games that have come before it, and ensured a wide variety of locations that are completely explorable in your trusty speedboat. There aren’t just several static fishing locations to cast your line at, but instead at each locale you unlock, there are a number of potential fishing spots to set your anchor at, necessitating your use of a trusty map to find the exact one with the species you’re currently looking for.

There are two modes in Rapala Pro Bass Fishing, a Seasons mode and a Free Fishing mode. The latter is self-explanatory, but the Seasons Mode is ultimately where the majority of your fishing time will be spent. You start Seasons mode at the rookie level, where you are given 6 tasks to complete before being able to take on tougher challenges at other locations. Tasks include things like finding a particular type of fish, or catching a fish above a certain score grade, or even full blown fishing tournaments against several computer controlled opponents. Tasks are usually timed, with tournaments extending to 15 minutes at times. With as many of these as there are in Rapala Pro Bass Fishing, expect to be in for the long haul, as this is one heavy tackle box of goodies. 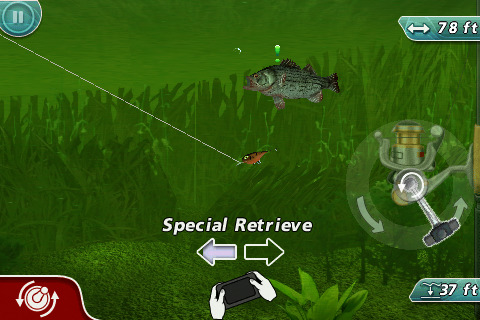 The actual fishing technique varies slightly between these games, but I was disappointed that Rapala Pro Bass Fishing opted for a much more casual, arcade heavy approach to the more technical fishing mechanics. This translates to a monotonous, toned down process of steering your boat via accelerometer to a large beacon of light (selected on your GPS map), casting your line by flicking your device forwards, then engaging in a series of gestures to hook your fish. Gestures change depending on the lure you have selected, but all are a simple combination of device tilts that help to pad out the fishing process.

Once your bait has been taken, you must tilt your device again to hook the fish (a bar will appear to show you the best time to do so) and then start reeling by circling the on-screen reel. Then the fun should begin, for as any salty sea dog will tell you– it’s the thrill of the fight that counts. And in Rapala Pro Bass Fishing, this process is simplified so much that we may as well be playing kindergarten fish magnet games. Reeling in your fish is as simple as staring at the tension meter, waiting for it to rise, then tilting your device to one side. Your rod is always centred on your screen, and the only movement possible is left and right movement. Dipping your rod, lifting it to pull taut your line, pulling it from side to side to tire the fish…none of that is emulated here, which is disappointing. 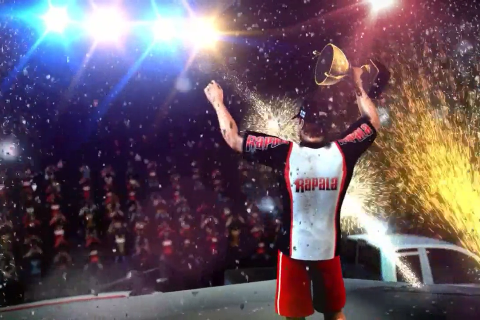 If it weren’t for the huge number of unlockables available; from rods, lures, fishing spots and new locations (that you buy through money earned in Seasons mode), that fact alone would steer us away from Rapala Fishing. iPad users are at least treated to a special local multiplayer fish-off that we can only hope makes its way in some form to all the devices. That aside, the fishing never seems to get truly challenging; and unlike some of the better fishing games, the whole process here does get repetitive. Still, you do have to appreciate the efforts put into Rapala Pro Bass Fishing. With 60 individual events, voiced commentary and multiple explorable locations, Rapala Pro Bass Fishing high production quality could still appeal to the more casual fishermen.