Two of Ngmoco‘s recently announced titles have made their debut in the Canadian App Store as of yesterday afternoon – Touch Pets: Cats and We City. As with most of Ngmoco’s games that are hosted over online servers, they have released these games in the limited market of Canada in order to test them out and make tweaks to the system before readying a worldwide release. During a Ngmoco media event at WWDC in June, we took a look at both Touch Pets: Cats and We City and determined them to be pretty much in line with previous Ngmoco releases. Although the apple doesn’t fall too far from the proverbial freemium tree that is the Ngmoco business model, both games offer up a nice free-to-play experience in their respective forms of virtual simulation.

Touch Pets: Cats – While retaining many of the same general concepts of its canine predecessor Touch Pets: Dogs, this feline-themed virtual pet game does away with the food bowl mechanic that was the bane of many Touch Pets: Dogs players and replaces it with catnip. In Touch Pets: Cats, you can play with your kitty at any time, and the catnip merely allows you to gain coins and experience at an accelerated rate. Playing with and caring for your pet is largely similar to Touch Pets: Dogs, and there is an emphasis on collecting items to customize your living spaces. You can visit your friends houses and pets as well using the Plus+ network, and can purchase additional catnip through IAP if you choose. Further information and a discussion of Touch Pets: Cats can be found in our forums. We City – Following in the footsteps of We Rule and We Farm, We City takes many of the same mechanics from those titles and places them in a modern metropolis setting. You’ll build your city from the ground up by placing buildings, streets, grass, and other infrastructure on a starting plot of land. As your city flourishes, you’ll be able to expand the area where you can build and unlock more items and buildings for your city. The main focus in We City is on industrial production, and you’ll need to build factories and stores that can produce goods and services for your citizens and those of your Plus+ network friends. This process can take time, however, and if you’re feeling impatient you can use in-app purchasing to buy ZAP that will speed up your rate of production. As always, a discussion of We City is taking place in our forums if you’re looking for more information and player impressions. 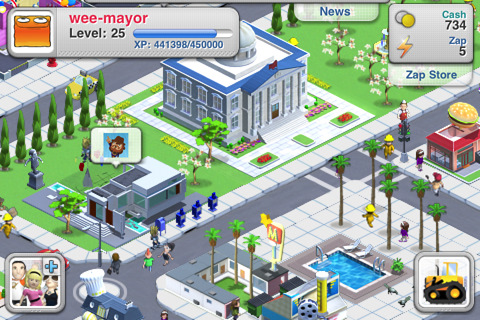 There’s not currently a set US release date for Touch Pets: Cats or We City, but both titles are free to download if you happen to have a Canadian iTunes account. For those that don’t, you can most likely expect to see both titles in the US App Store sometime before the end of the year.