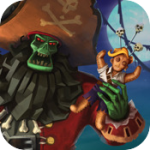 The Monkey Island series follows the exploits of Guybrush Threepwood, a white blouse wearing wannabe pirate with a name that is nearly constantly mispronounced by every character you come across in both games. The ghost pirate LeChuck causes problems in both game, and vanquishing him both times requires a ridiculous adventure filled with hilarious writing, a great soundtrack, and complete voiceovers. If you have an iPad, I highly recommend picking up the iPad version since it looks fabulous on the device– and it even comes with director commentary.

You really can’t go wrong with both of the iPhone games for 99¢ a pop. Both work fine on the iPad pixel doubled, and while they don’t have Retina Display resolution graphics, they’re still a ton of fun to play through on the iPhone and each version of the game comes with an associated lite if you’d like to try before you buy.

Update: Scratch that bit about Retina Display graphics, Monkey Island 2 was updated mere moments ago to include high resolution graphics. If you’ve got an iPhone 4 or new iPod touch, this is 99¢ you really should spend.