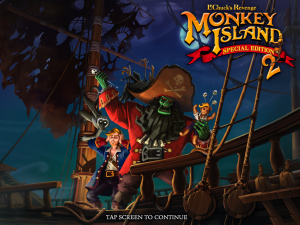 Few games inspire more heartfelt nostalgia than the classic LucasArts adventure games of the late 80’s and early 90’s. While we’ve still got our fingers and toes crossed that we’ll eventually see similar “special edition" treatments to Maniac Mansion and/or Day of the Tentacle, we couldn’t be happier that the Monkey Island series is being re-released with the level of intimate care that we’ve seen so far both with the previously released The Secret of Monkey Island: Special Edition [$7.99 / Free], and Monkey Island 2 Special Edition: LeChuck’s Revenge [iPhone: $7.99 / Free – iPad: $9.99 / Free] which just hit the App Store mere moments ago. 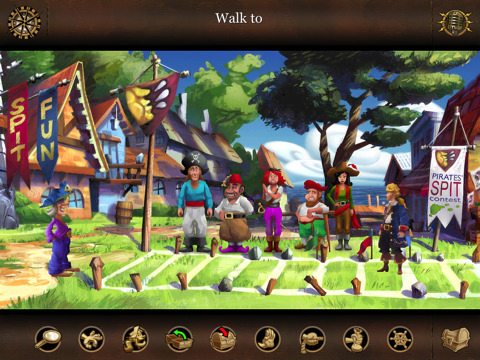 Monkey Island 2 takes place after the events of the first Monkey Island where wannabe pirate Guybrush Threepwood is introduced and meets the cast of characters included in the game as he seeks out the pirate leaders and attempts to prove himself through three challenges. A ghost pirate named LeChuck is thrown in to the mix, along with the beautiful Elaine Marley. Without spoiling too much, the game concludes with romance, root beer, and fireworks. Even though playing the original is by no means required to enjoy the sequel, Monkey Island is filled with great writing, silly characters, funny situations, and often extremely odd solutions to the problems that Guybrush must overcome which is really worth checking out– Especially considering the fantastic job LucasArts did on the iPhone port of the special edition release. 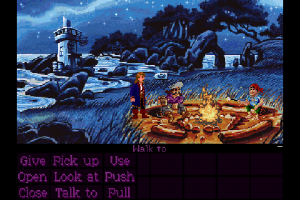 Monkey Island 2 opens with our familiar protagonist Guybrush Threepwood setting the scene for his next adventure. Now that LeChuck is no more, he decides to search for the treasure of “Big Whoop", and in typical Guybrush fashion, he has no idea where it is, has no way to get there, and doesn’t really know if it even exists at all. Regardless, this hasn’t stopped him in the past, and it certainly won’t stop him now. Of course no LucasArts adventure game could ever be as straight forward as finding out where some treasure is, figuring out a way to get there, then digging it up, and it doesn’t take long before you’re toe to toe with Largo LaGrande, LeChuck’s old henchman. One thing leads to another, and LeChuck returns, turning your simple treasure hunt in to yet another epic battle with the ghost (now zombie) pirate.

With a development team that was nearly identical to that of the original Secret of Monkey Island, the sequel shares all of the same fantastic writing and cartoonish charm. Monkey Island 2 is hilarious at times, and incredibly cheesy at others, but manages to maintain a highly entertaining witty atmosphere the whole way through. The port of the original to the iPhone was a load of fun, with the only real complaint being the control system which treated the touchscreen like a trackpad which you used to move the in-game cursor around. Thankfully, this has been replaced by a new default control scheme in the sequel which works like many other iPhone adventures games where you just touch areas in the game world that you want to move to, or objects you want to interact with. 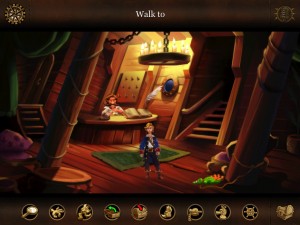 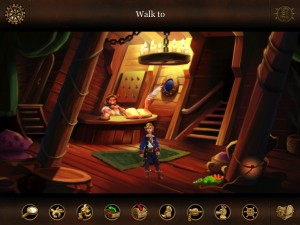 The special edition of Monkey Island 2 also has several other refinements over the first, my personal favorite being the highlighting system that shows you objects and areas that you can interact with. Tapping the screen with two fingers makes everything interactive glow, easily allowing you to see things you’ve missed, or other things to try. This is an incredibly welcome change from the standard tap/click on absolutely everything once you get stuck in an area. This two finger tap also illuminates doors you can walk through, making it very easy to see where you’re able to go so you don’t miss anything on your journey.

If you do get stuck, Monkey Island 2 features the same great hint system found in the original where you can get hints which initially start out extremely vague to push you in the right direction which eventually ramp up to flat out telling you where to go and what to do. Having played quite a few classic adventure game ports on the iPhone, this really is the best approach as you never need to leave the game to check a walkthrough online, and it’s usually much more fun to just get a small hint to send you in the right direction instead of just reading exactly what to do. (Of course, that’s there if you need it.) 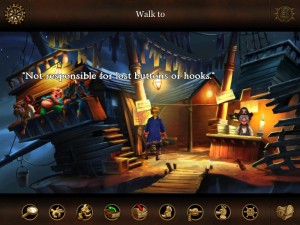 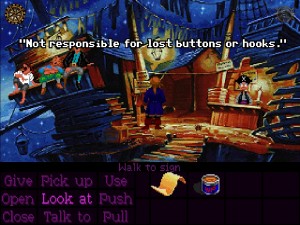 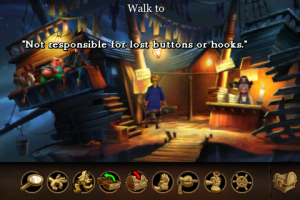 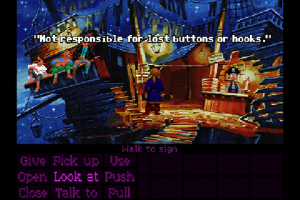 Monkey Island 2 also has the incredibly superfluous yet amazingly cool classic graphics included which blew out mind when we first saw the previous special edition. By default you can play the game with its redone graphics, stellar voiceovers, and the toolbar of actions that Guybrush is capable of. Swiping two fingers across the screen causes the game to fade out in to its original pixelated glory with the top half of the screen displaying the original game with the set of actions below.

Monkey Island 2 Special Edition: LeChuck’s Revenge launched with separate iPad and iPhone versions of the game, and while I would have loved there to be one universal version for both devices, the iPad game is definitely the one to have. Not only does it have the same adventure from its iPhone counterpart, but currently for an additional two bucks (assuming you own an iPad) you get high resolution graphics and audio commentary. On quite a few areas of the game, you’re able to tap a microphone icon in the top right corner and listen to the creators talk about wherever you are in game. It’s not exactly a killer feature that’s worth getting upset over if you only have an iPhone or iPod touch, but it is a nice addition. 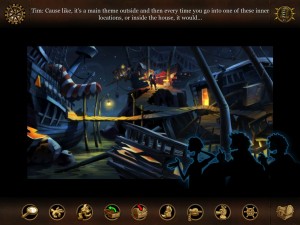 The one thing that is a bit of a disappointment is that LucasArts flaunts these fantastic looking high resolution art assets in the iPad version, but played on my iPhone 4, the iPhone version is disappointingly low resolution in comparison. It still looks good, but I would have loved to have seen some Retina Display support in Monkey Island 2, I’m hopeful for future updates that might beef up the graphics, but it seems doubtful that audio commentary will ever make its way to the iPhone.

I could go on and on about how great the Monkey Island series is, how wonderful any game build on the SCUMM engine is, and the genius of the original creators Ron Gilbert, Tim Schafer, and Dave Grossman, but really this is just a game you need to play. LucasArts is covering all its bases with this launch, with free lites corresponding to both the full iPhone or iPad versions. If you’ve never played an adventure game before, I can’t think of a better place to start. The Monkey Island series is great, and the few minor refinements added to the sequel makes this one of the most accessible point and click (point and tap?) games on the App Store. Download the lite version and give it a try, if the game hooks you in, chances are you will enjoy the entirety of both Monkey Island and Monkey Island 2.

On the other hand, if you’re ever played a Monkey Island game before, I doubt you even made it this far in this review before just clicking the first iTunes link you could find and downloading the game for whatever device you own.