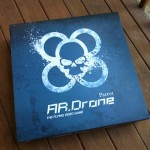 There is nothing worse than getting a FedEx tracking number late on a Thursday, knowing full well that your package will not arrive until Monday. Even as an adult, I’ll still obsessively refresh tracking information, even when I know something won’t be delivered for days. Still, that didn’t stop me from tracking the Parrot AR.Drone all weekend, or getting up and looking out the window when I even thought I might have heard the sound of tires on gravel in the distance all day today. Surely any self respecting geek knows the feeling as they anxiously await their newest techno-toy.

The AR.Drone arrived mere moments ago, and after carefully opening the packaging I was greeted with the wondrous quadricopter that we’ve been drooling over since we first caught wind of it back at CES in January. Since then we’ve had a brief hands-on and later discovered that it would sell for $299.99 available for preorder through Brookstone. 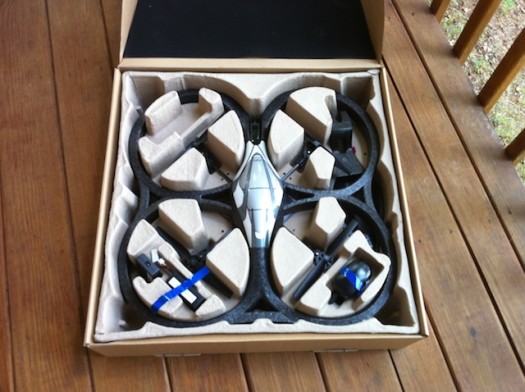 In the demos we’ve been given in the past, we’ve never actually been able to touch the unit, only fly it around for a few seconds inside of the controlled environment of the Parrot booth at conventions. My first impression as I took it out of the box was just how amazingly light and delicate the whole unit feels. I suppose it makes sense that it’s light because it has to fly, but it feels like nothing. 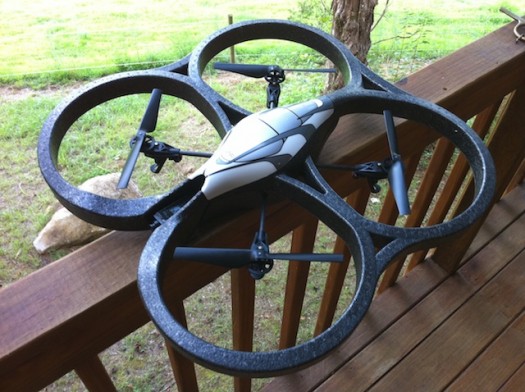 In the box with the unit is a brief quick start guide which explains to first charge the battery, how to install the battery, and the basics of getting the Parrot AR.Drone in the air. Like any impatient man child, I immediately installed the battery, and paired it to my iPhone which was as simple as downloading the free Parrot AR.Drone Free Flight app and connecting to the WiFi network it creates. After that, you launch the app, it connects to the quadricopter, and you’re met with a screen that looks like this: 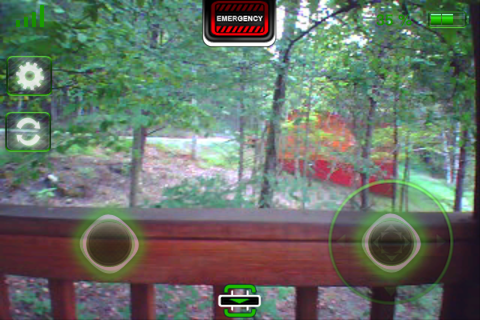 Unfortunately, since I skipped that whole “charge the battery first" step, the AR.Drone only flew for about 45 seconds before it ran out of juice. I’m currently impatiently waiting the light on the charger to flip from red to green, and daylight is fading fast. I hope to have some extensive video of how the unit works, how it is assembled, and flying it in the not too distant future. (All depending on how long it takes to charge of course.)

Following that, I’ll be doing a full review of the Parrot AR.Drone, so if you have any questions that you’d like answered or anything you want me to do as I put it through its paces, post a comment on this story.

Update: With the sun about to set I grabbed the battery with as much charge as the charger was able to give me and headed out to shoot some video. The companion app initially showed that I was at around 30% battery, which seemed to last for about 10 minutes of outdoor flight time. Here’s a video of my first real flight outdoors with the Parrot AR.Drone:

Something that immediately struck me was how awesome the device is at steadying itself, even with the breeze outside. In the video I am actively trying to get it to lose control, by having it bank in to the wind and the onboard flight controller just automatically leveled the quadricopter without any issues at all. Also, it’s really cool how low it will fly to the ground, automatically adjusting its height as it goes up or down hills. Buzzing over the grass at about a foot off the ground was a truly impressive display of how accurately the AR.Drone can hold its altitude. While none of these things are really new revelations from our previous hands-ons at conventions, all of those were always indoors in a very small controlled environment with no winds at all. A part of me was expecting everything to fall apart once the AR.Drone got outside of the calm 10×10 Parrot tent on the show floor… But it performed flawlessly.

The strangest part about flying the AR.Drone is trusting the iPhone display over just watching it fly through the air and controlling it like a normal RC helicopter. This is even more disorienting when you notice that you can see yourself in the image. The AR.Drone is always controlled from its viewpoint, creating a brain-bending situation where you can see the device with your eyes, you in the devices eyes, and everything is backwards as you’re facing it. 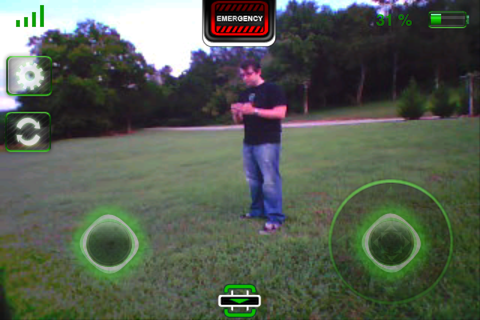 At demos in the past, controlling the AR.Drone seemed really easy, and it is when you’re limited by about 10 feet in any direction. When you actually get outdoors, and have tons of obstacles to fly around, piloting the device actually seems to take a bit of skill– Even with all the automated flight systems it has.

Just as I was getting good, I was met with this yet again: 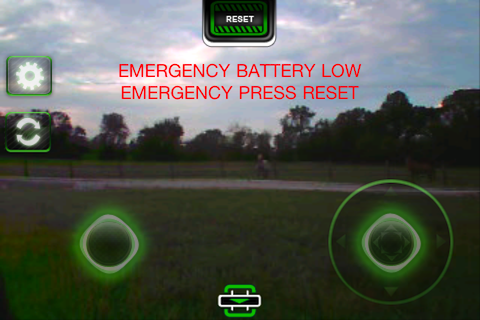 So far I’d really advise anyone who already had one of these preordered to buy as many extra batteries as you feel comfortable purchasing. Flying the AR.Drone is really cool, but having it run out of battery, then sitting and waiting for the battery to charge sucks just as much as it did when I was a kid waiting for the NiCD batteries of my various RC cards to juice back up before I could play again.